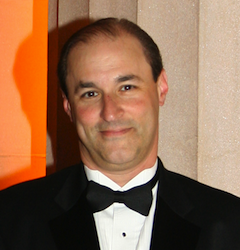 A well-known face is missing from the War Memorial lobby, but Eric Colby hasn't gone far, he is now in the back of the building, not the front. House Manager for the past eight years, Colby has been named San Francisco Opera's Technical and Safety Director, responsible for the supervision of the day-to-day operation of carpentry, properties, lighting, sound, shipping, and all other technical operations of the Production Department. He will oversee all crew calls and crew activities — a big job.

Colby has decades of experience in the production and security of large scale events, touring and production coordination; he spent some 15 years in production management for major concert tours, including some of those by the Grateful Dead, and 10 years in venue management. The previous Technical Director was Marc Scott, who was with the company since 1996.

Until a new House Manager is hired, the position is filled by George Windstrup, head usher for the orchestra section. Incidentally, while checking the company roster, I found a position named "Show Maid." It turns out to be a pleasantly archaic title for a custodian on duty during performances.