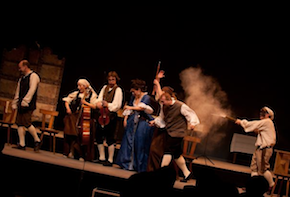 After the report in last week's column about a Purim musical celebrating Esther's rescue of Jews in Persia, word comes now of San Francisco Renaissance Voices presenting the U.S. premiere of an 18th century opera about Esther, March 15-23 in Berkeley, Palo Alto, San Francisco, and Belvedere-Tiburon.

After centuries of neglect, Cristiano Giuseppe Lidarti's Esther (t'shuat Yisrael al y'dei Ester) has been rediscovered only recently, so Renaissance Voices will have the distinction of being the second in the world to revive the opera, after Barcelona's Le Tendre Amour. The opera has been recorded by Friedemann Layer and Orchestre National de Montpellier.

Lidarti was an Austrian composer, born in Vienna of Italian descent. The neglect is puzzling because, as Renaissance Voice Executive Director J. Jeff Badger says, "this is truly a beautiful work ... many parts remind me of Mozart's Great Mass in C Minor that was composed about 10 years after this one."

When Badger heard about the Barcelona production, he asked to use the Le Tendre Amour orchestration, but it was no longer available, and his comparison is: "their reduced orchestration, in this video, is rather baroque; our production is more of an early classical orchestra, indicated by Lidarti in his score, pitched at 430 and including corna di caccia and traverse flutes."

Lidarti's opera/oratorio, which tells the story of Queen Esther's rescue of the Jewish people from the wicked Haman, was completed in 1774 as a commission for the Jewish community in Amsterdam. It was rediscovered in 1999. The text was prepared by a Lidarti-contemporary rabbi, Venetian-born Jacob Raphael ben Simhah Judah Saraval, who took the English libretto for Handel’s 1718 Esther oratorio, and translated it into Hebrew.

This production is part of Renaissance Voices' 2013–2014 season, "Kol Israel: The Voice of Judaism in Early Music," a series of programs curated by Rabbi Reuben Zellman, currently completing a Master of Music degree at S.F. State University in the area of early music and the Jewish choral repertoire.

The concluding program of the series, May 24-June 8, will be a musical ceremony composed by Volunio Gallichi and Francesco Drei for the 1786 dedication of the new synagogue in Siena, Italy, as well as music for weddings, Shabbat and other celebrations. The program includes Louis Saladin’s Canticum Hebraicum, composed for chorus and orchestra in 1670. The June 3 concert, at Crowden Music Center, will be part of the Berkeley Festival & Exhibition of Early Music; at this event only Consort du Danse Baroque from England will participate.