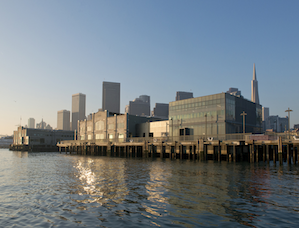 San Francisco's Exploratorium is known the world over for its unique hands-on science exhibits, a kind of museum where visitors — especially children — are encouraged, not forbidden, to touch what's on show, to play, experiment, enjoy.

As always, ever since its opening in 1969 with Cybernetic Serendipity, a combination of art, science, and technology curated by Jasia Reichardt for the Institute of Contemporary Art in London, the Exploratorium will have an abundance of art shows when it opens its big new venue, at Pier 15, on April 17.

The grand opening will feature, in addition to the hands-on science exhibits, 40 new art projects, ranging from large-scale immersive installations to site-specific displays, such as a large-scale fog environment, a fold-out guide to the atmosphere, a sidewalk grate that sonically comes alive at night, a giant Douglas Fir tree tipped on its side, and a library on Bay history.

The tradition continues: Just a few years after its opening, the Exploratorium had established itself as the home for a burgeoning counter-cultural art scene. Over the last 44 years the Exploratorium has presented the work of hundreds of artists and cultivated a unique working environment for artists interested in cross-disciplinary investigations and hybrid approaches.

After the opening of the new facility, we'll report on sound and music projects.