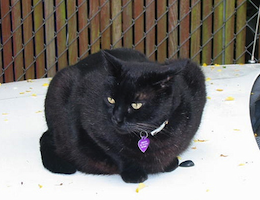 No, not the opera by Carl Maria von Weber (which should really be performed much more frequently than it is, especially in this country).

Nor are we talking about the imperious fairyland king of Midsummer Night's Dream, or Oberon, König der Elfen, by Paul Wranitzky, or the hero of F.L.Æ. Kunzen's 1789 Danish opera Holger Danske.

No, this Oberon is a cat, owner of SFCV's Lisa Hirsch, who wrote a remarkable obituary on Monday upon Oberon's demise. This column — unlike Jon Carroll's in The San Francisco Chronicle — has had a lamentable dearth of feline discussions.

Lisa adds this note to the obituary: "When we were talking about names for the energetic young kitten, one of my suggestions was Wotan. Donna nixed it and we settled on Oberon, which turned out to be approximately equivalent to Wotan, since he always did think he was in charge.