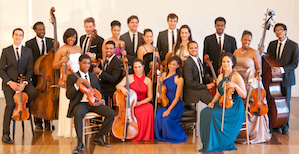 The Napa Valley Festival Del Sole, always with an eccentric calendar, opens tonight, July 10, with two Sophia Loren films, Arabesque and El Cid. If not great films at least a great beauty, and who could ever forget her performance in Vittorio De Sica’s, Two Women. The next day the festival continues its 10-day run with concerts, luncheons, dinners, wine tastings, an opera gala, a “wellness conversation,” Yoga in the Vineyard, more luncheons, a presentation by Tiffany & Co., and late night parties galore. The Festival wraps up on July 20.

Behind the veils there are some terrific concerts and super star performers, including Joshua Bell, Alondra de la Parra, Pinchas Zuckerman, James Valenti, Bouchaine Young, and the ever charming Ms. Loren, herself.

There will also be two very noteworthy performances by the Sphinx Orchestra (July 12 and 15 at the Green Center, under the baton of Alondra de la Parra), which is known for its quality but also because it is the only orchestra in America comprised entirely of Black and Latino musicians. They come from all walks of orchestra life, including past and current members of such as the New York Philharmonic, Cleveland Orchestra, Los Angeles Philharmonic, and the Met Opera Orchestra, as well as faculty members at some of the top conservatories in the country. 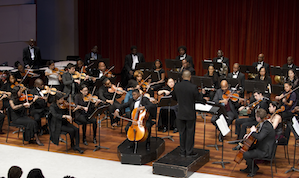 The Sphinx Orchestra, which began performing in 1997, is a model of diversity, combining musicians from different generations, cultures, and economic backgrounds. “What unites them,” says Sphinx’s Executive and Artistic director, Afa Sadykhly Dworkin, “is the unwavering passion they take in their craft and what distinguishes them as a cohesive group is their sense of community and unity.”

The orchestra is just one aspect of the Sphinx organization, which was founded by Aaron Dworkin. He was awarded a MacArthur Fellowship in 2005, a former member of the Obama National Arts Policy Committee, and was President Obama’s first appointment to the National Council on the Arts. He is also a renaissance man: a violinist, poet, author, entrepreneur, activist, advisor, and academic.

Sphinx has grown into a nation wide force for the arts in minority communities. It’s mission has been to launch a series of programs to attract young artists, train them, encourage them, get them access to schools and conservatoires where they can develop their talent and then help them to become performing artists —and one day, perhaps, become mentors for other young musicians.

Ms. Dworkin notes that “artistic merit” is often the catch phrase for exclusion. “The fact is there are some perceptual things that linger, for example the implicit notion that musicians of color can’t perform at the same level as others. And that simply isn’t true. Moreover, it’s not founded on anything; it’s a perception based in large measure on the fact that you don’t see many musicians of color in orchestras. One or two at most.

“But I can tell you that there are many highly qualified musicians who are ready to enter the ranks of major orchestras or conservatories and one facet of what we do is to discover these musicians.”