Here’s our short list of highly recommended, less traveled music festivals this summer. Some of these have been around for years but are not well known. We’ve chosen to highlight particular performances, but of course there may well be other events before or after of equal interest. These festivals are all within a 14-hour drive of San Francisco, and we’ve included tips for local hotel and restaurants. Naturally, these are all family friendly, most of all the festival in Cabrillo. However, some are offered in the spirit of romantic road trips, where wonderful music is the incentive to disappear.

Reed College in Portland, Oregon hosts this festival, now in its 44th year, from June 23 to July 27. 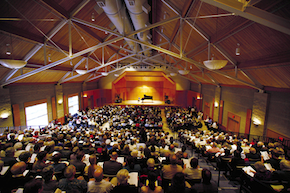 June 28, Saturday, with musicians Theodore Arm (violin); Benjamin Beilman (violin); Andres Diaz (cello); Ida Kavafian (violin); Paul Neubauer (viola); Steven Tenenbom (viola); and Peter Wiley (cello). These are all top musicians and may also be familiar because several teach at some of the nation’s great conservatories. For an evening of exceptional talent, this is it. The program includes Zoltán Kodály’s Duo for Violin and Cello, Op 7; Alfredo D/Ambrosio’s String Quartet in C Minor, Op. 42; and the highlight of the evening, Johannes Brahms’ Sextet in B-Flat Major, Op. 18, No. 1. The concert is at Kaul Auditorium, at 8 p.m. The next day there is a 4 p.m. performance at Lincoln Performance Hall on the Portland State University campus.

Whether looking at colleges in the Northwest or setting out to visit a gorgeous city on your way up the coast, Portland is a must-stop, recent problems with drinking water notwithstanding. Consider The Heathman Hotel, historic, charmful, with in-room French press. And great food by all accounts. Otherwise, for dinner, Ava Gene’s, one of the city’s best new restaurants. Driving time from San Francisco to Portland: 9 hours, 40 minutes.

As always, a wide variety of music will be heard in the big tent perched on the Mendocino headlands. The festival runs from July 12 -26. 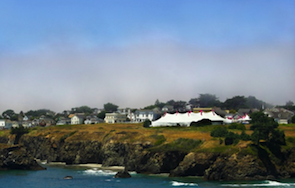 July 12, Saturday: Stephen Prutsman plays the Mozart Piano Concerto in C Minor, and then conductor/composer Allan Pollack will present his very popular piece, A Summer Evening at the Boonville Fair. Maestro Pollack, music director of the Symphony of the Redwoods as well as the Camellia Symphony Orchestra in Sacramento, is one of the founders of the Mendocino Festival, which opened in 1986, and is set in one of the most iconic landscapes in Northern California. Festival evenings include orchestra concerts, big band, chamber music ensembles, dance, blues, jazz, world, folk, bluegrass, and contemporary music. Daytime concerts include lecture/recitals, a performance by participants in the Emerging Artists Program, and small concerts in intimate venues throughout the historic towns of Mendocino and Fort Bragg. Tickets are $12 to $47.

Mendocino is about bluffs and beaches and its quaint village atmosphere. It has several good restaurants. One favorite is the Mendocino Café, which takes great pride in its organic ingredients. Hotels include the MacCallum House Inn, which is best known for its “interesting” cocktails and breakfasts. Pets allowed. Driving time from San Francisco to Mendocino: 3 hours, 20 minutes.

Music and adventure are equally available at this wonderfully-sited festival. 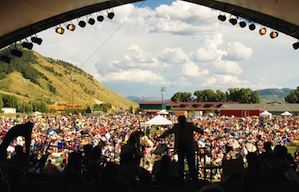 July 23, Wednesday, Greg Anderson and Elizabeth Roe, piano duo. Two Julliard-trained pianists. SFCV has called them, “The most dynamic duo of this generation … (with) explosive creativity.” They’ve also produced some Emmy-nominated music videos — Anderson, 35, is a video producer, as well as pianist and composer. Roe is a recipient of the William Petschek Piano Debut Recital Award and one of the inaugural fellows of The Academy, a music-for-children advocacy program of Carnegie Hall, The Juilliard School, and The Weill Music Institute. On July 23, the program includes: Rachmaninov’s Fantasie-tableaux (Suite No. 1), op. 5; excerpts from Stravinsky’s The Rite of Spring; Piazzolla, Libertango; Mozart, Papageno! (arrangements from The Magic Flute); Gluck, Ballet from Orphée et Eurydice; and Bizet, Carmen Fantasy. The concert is at the Center for the Arts at 8 p.m. Tickets range from $9 to $35.

The festival, which runs from July 3 to August 16, is in Jackson Hole; an entrance to the Grand Teton National Park is 5 miles to the north, up the incomparable Hwy 89, and then it’s another 55 miles to Yellowstone. So think of this in terms of peaks that rise to 7,000 feet and bears that are actually a threat. One suggestion is to stay in a log cabin along the Snake River (with fully equipped kitchens and ‘hand-crafted lodgepole furnishings’.) Driving time from San Francisco to Jackson Hole: 13 hours, 45 minutes.

Unlike some contemporary music festivals, this one has a laid-back, Santa Cruz vibe and a whole day devoted to children. 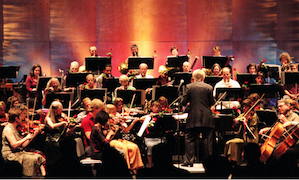 August 3, Sunday: Time For Three classically trained musicians, including Zachary De Pue, violin; Nicolas Kendall, violin; and Ranaan Meyer, double bass. They have acquired semi-cult status since 2003 when De Pue and Meyer were playing with the Philadelphia Orchestra. A power-failure during a performance one night led the two to begin an impromptu jam session that featured a range of music. The crowd rose to its feet. Their programs usually ranges from Bach and Brahms to the Beatles and Kanye West. Concert at the Santa Cruz Auditorium is at 8 p.m.; tickets, from $27 to $35.

The festival runs from July 27 to August 10. August 3 is an especially good day to visit the festival because there’s a family concert (also at the Santa Cruz Auditorium), which begins at 1 p.m. These concerts have become wildly popular. They begin with a “tour of the orchestra,” where children are introduced to the musicians and can touch and hold the instruments. In addition, a world-premiere festival commission: Jonathan Sheffer’s The Conference of the Birds, which was inspired by “a Persian folk tale about a flock of birds on a spiritual journey.” Along the way, the orchestra demonstrates its ability to imitate chirps, coos, caws, and calls. Tickets are free but must be acquired. Driving time from San Francisco to Santa Cruz: 1 hour, 20 minutes. 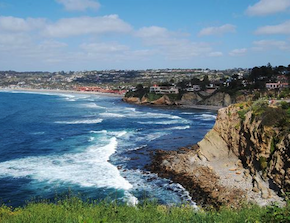 The LJMS is not kidding when they advertise “We bring the world to San Diego.” The roster of musicians playing over the three-week festival includes pianists Yefim Bronfman, Orion Weiss, and Inon Barnatan; the Miró Quartet, the Assad Brothers on guitar, and Alison Balsom on trumpet. And many of the ensemble players are major classical stars as well, like violinists Jennifer Frautschi, Arnaud Sussmann, and Yura Lee.

The festival, which began in 1986, runs from July 30 to August 22. A few blocks away from St. James Church is the much-recommended Empress Hotel and one of the town’s best restaurants, Georges at the Cove (California Modern), is also close by. Driving time from San Francisco to La Jolla: 7 hours, 25 minutes.