There is something about flamenco music and Spain evoked in Woody Allen’s 2008 film Vicky Cristina Barcelona that is at once inviting and tempestuous. A Spanish red wine and tapas-fueled night out at a San Francisco candlelit bodega, complete with a recorded soulful flamenco bulerias (bolero) playing in the background, comes close to the real thing.

There is, however, nothing like the real thing, as four flamenco artists will demonstrate over the next few days as they heat up San Francisco Bay Area stages for some serious heel smashing, head tossing, and mesmerizing vocals.

The passion, fire, and grace of flamenco have long made it popular around the world, according to Miguel Marin, the Andalusian-born, New York-based artistic director of the Flamenco Festival, an organization that tracks the pulse of the art form in Spain and produces international tours of Spanish artists. The recent death of Spanish flamenco guitar legend Paco de Lucia only deepened the musical genre’s international following, said Marin, speaking by telephone in early March from Manhattan, where the Flamenco Festival was underway.

“He explored many other kinds of music and really went out of the boundaries of flamenco,” said Marin of de Lucia, noting the guitarist explored rhythms, harmonies, and instruments from outside the flamenco norm, such as incorporating the Peruvian cajón, a six-sided wooden box that’s played as percussion, into the musical mix.

“My house was an art factory growing up” -Estrella Morente, flamenco singer

As a result, Marin said, de Lucia had a tremendous impact on the flamenco world, including Morente and Tomatito. A teenage protege of de Lucia, the Latin Grammy award-winning guitarist Tomatito, born José Ferńandez Torres, is known for blending traditional flamenco with jazz. Like his mentor, Tomatito, 55, combines age-old flamenco guitar techniques, such as hard-edge strumming and suspenseful phrasing, to perform a constantly shifting musical drama, his critics say. His upcoming performance features musicians and a dancer. Requests for an interview with the guitarist, who is touring the United States, were not answered by press time. 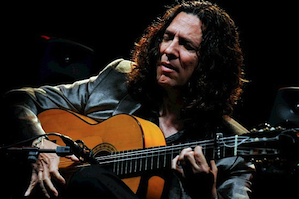 The eldest daughter of the late Enrique Morente, a prominent Spanish flamenco singer, and the flamenco dancer Aurora Carbonell, Morente has become one of Spain’s most sought-after performers. She began participating in concerts with her father at age seven. “My house was an art factory growing up,” she told the Miami Herald in an interview earlier this year.

She gained international prominence as the singing voice behind the moving lips of Spanish actress Peńelope Cruz in Pedro Almodovar’s 2006 film Volver. Nominated for a Grammy for best flamenco recording for her debut CD Mujeres, she sings with both Paco de Lucia and her father on her latest recording Autoretratto (Self-portrait). Morente declined an interview request, citing her pressing tour schedule, said her representative Cindy Byram, in an email.

Music critics say Morente represents where flamenco comes from and where flamenco is going. Marin, who said he knows the Morente family well, agreed. “Yes, no doubt because of her father, who was very respectful of tradition, she’s really deeply rooted in it,” he said. “All the exploration that she does, she does from the mastery of flamenco — that respect. This knowledge allows her to go into other types of music and interpret them.”

That’s the beauty of flamenco. It’s so much like jazz; very improvisational. Musicians and dancers just jam together.” — Carolina Lugo, flamenco dancer and choreographer

The flamenco tradition that Morente and her fellow artists will perform this week has its origins in a musical migration from North Africa and India, borrowing traditions from Arabic, Jewish, and Indian music, according to Bay Area flamenco dancer and teacher Carolina Lugo, who performs later this week with her daughter Carolé.

Flamenco comes from the gypsies in Spain, said Lugo, who has studied the art form for several decades in Spain and in the U.S. Its golden years were in the late 1920s, noted Lugo, when flamenco moved from the living rooms of gypsies to cabarets. “Gypsies would bring a slab of wood to the night club and dance on top of it,” she said.

Before gypsies danced in their living rooms, however, they celebrated outside around the fire and under the moon, she noted. “That’s where the polka dots come in [on performers’ clothing] ... they’re little moons, lunates, a sign of good luck to gypsies,” said Lugo, in a telephone interview from her dance studio in Pleasant Hill. Costumes with polka dots are also worn in flamenco, she explained, to correspond with different rhythms, such as the fast-moving, 12-count bulerias, and are associated with joyful songs and dances. Performers don solid-color clothing, she explained, when performing songs and dances on sad or serious topics.

While audiences around the world appreciate flamenco, concertgoers are often unfamiliar with what it actually is, said Lugo. Flamenco is one of three related dance categories that include Spanish classical dance, and regional or folk dance, which make up a bigger heading called Spanish dance, she explained.

Positions of the torso, port de bras (arms) and epaulement (shoulders, head and neck) vary in each of the Spanish dance forms. Shoes with tiny nails hammered into heels and toes are worn in both flamenco and Spanish classical dance, although the heels are a little wider in flamenco, which has heavier footwork, Lugo said.

“People connect with the intensity of emotions on stage and that’s the message [Estrella is] bringing to audiences. It relates to basic human emotions that are part of every culture.” — Miguel Marin, director of Flamenco Festival

Initially footwork was primarily for male dancers, while female dancers emphasized arms and attenuated torsos to underscore their femininity, according to Lugo. Today, footwork is done by both genders. “That’s important for women, otherwise you’re just all feet,” she said.

Castanets aren’t played much of the time in flamenco, said Lugo, as only a handful of rhythms use them, such as a sevillanas, a folk dance, which has roughly a 3/4 time signature, although it is generally counted in 6/8 time. “It all depends on the artist and how skilled they are with castanets,” she said. 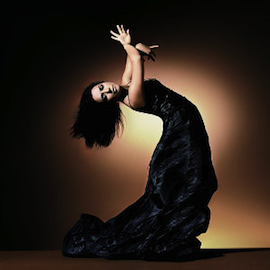 The rhythm patterns of flamenco are complicated. “People seem to think it lacks complexity; that musically speaking it’s as easy as the waltz, 1-2-3. But it’s not,” said Lugo. Some of the 12-count songs, such as the bulerias, can be counted in sixes, she said. An eight-count Argentine tango has a different rhythmic emphasis than a flamenco tangos llamada, where the stresses on counts aren’t even, as in a 1-2-3-4-5-6-7-8 pattern.

Experienced performers can pull themselves in and out of the music, dance, and vocals onstage by cuing with accompanying musicians based on the piece’s rhythmic structure, according to Lugo. “That’s the beauty of flamenco,” she said. “It’s so much like jazz; very improvisational. Musicians and dancers just jam together. The minute you have more than one dancer on stage, though, you have to have choreography.”

By contrast, a soloist can be spontaneous. “It's where the duende — the magic — comes in,” she said.

Duende is de rigueur for a flamenco artist, according to experts. It’s their mojo, said one knowledgeable observer. Defining it, however, is elusive, said Marin. “It’s the magic that happens on the stage,” he said, pausing while reaching for an explanation for something that may be unexplainable. “It’s going beyond technique, beyond special effects. It’s the experience that’s almost spiritual that makes people feel like they’re in another dimension. Estrella — she totally has that duende.”

If flamenco does transport audiences into another dimension, it’s one where language is no obstacle. Flamenco is sung in Spanish, yet has global aficionados, noted Marin. “We’ve played crowded concerts in Japan and in India. That the singing is in Spanish makes no difference. There are no boundaries with language,” he said. “People connect with the intensity of emotions on stage and that’s the message [Estrella is] bringing to audiences. It relates to basic human emotions that are part of every culture. It’s one of those things that makes flamenco universal. People can feel that human connection.”