No memories of finger positions remain from childhood cello lessons, so I will have to wait for SFCV fellow writer and professional violist Michelle Dulak Thomson to tell me if Christopher Walken and Philip Seymour Hoffman are holding their respective instrument correctly. It looks convincing enough for anybody not in the performance business.

A Late Quartet, shown at this year's Mill Valley Film Festival and due to open here commercially on Nov. 2 (not Nov. 9, as previously announced), faces and wins over a special challenge to the suspension of disbelief. Four movie stars appear as members of a string quartet, so they have to perform on instruments as if they were seasoned professional musicians.

Disbelief disappears almost immediately as we see the four performing — with credit due to Director Yaron Zilberman, cinematographers, audio engineers; and actors Walken, Hoffman, Catherine Keener, and Mark Ivanir — all working smoothly together.

The title refers to Beethoven's String Quartet No. 14 in C Minor, Op. 131, an apex of chamber music, written just a year before the composer's death. It is performed gloriously on the film's soundtrack by the Brentano Quartet. 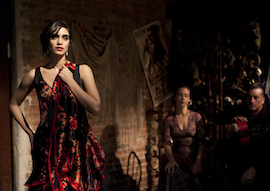 Although music is central to the film, its essence is a "show must go on" backstage drama where the stage is the concert hall and rehearsal rooms.

Ivanir, an Israeli actor seen before in Steven Spielberg films, may be the least known of the four, but his performance as the quartet's first violinist is outstanding. In the story, his tutoring (and affair with) the daughter of the ensemble's married couple is just one of the many extramusical conflicts with impact on the life and work of the quartet. Imogen Poots, in the role of the violin student, is an impressive, lively young actress.

Walken, the cellist, as the founder and leader of the 20-year-old quartet, is a large presence with the least effort. His is an embodiment of the role without "acting." A central story line is his diagnosis with Parkinson's disease and the immediate threat it means for the ensemble as it is preparing for an important, anniversary performance of the Beethoven.

Hoffman, the second violinist, and Keener, the violist, are a couple whose marriage and lives are coming apart. Each has complicated relationships with the other members of the quartet.

Life, agony, and music unfold in the Manhattan setting, leading to a musical-dramatic climax, which has impact even as almost all component conflicts remain unresolved.

It is an attractive, impressive film, especially of interest to music aficionados, but the virtual nonstop piling on of relationship problems music ensembles face, usually less intensely, makes it more melodramatic than the director might have intended.