Says San Francisco composer Kurt Rohde of his Concertino, which will receive its world premiere June 3 (in Mill Valley) and June 7 (in San Francisco) with the Left Coast Chamber Ensemble:

Just completed, this is the last piece I began in Rome. There is an odd tinge of sadness and 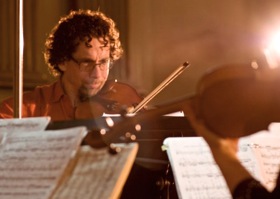 closure about the fact that all the music I began in Rome is now finished, that the year there really is over, and whatever changes happened to me while in Rome are up to me to maintain and nurture at this point.

Along with Rohde Rohde, the violist/founder of the Left Coast Chamber Ensemble, and a prolific composer, two more San Francisco musicians have been benefitting from artistic residence in Rome. While Rohde's Rome Prize stay recently concluded, San Francisco–raised composer, Lisa Bielawa, who now lives in New York, is a current Rome Prize winner; and ODC Dance Company founder/artisticdirector/choreographer Brenda Way was a Resident in the Arts, and served as a senior advisor to the Rome Prize winners, including Rohde. 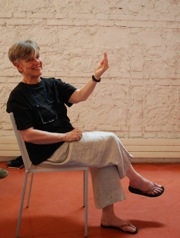 The annual Rome Prize is awarded by the American Academy in Rome, Italy, located on the Janiculum, the highest of the city’s seven hills. The Academy was established in 1894, was chartered by the U.S. Congress in 1905, and has been awarding a composition prize since 1924.

This prestigious award is made annually, through a national competition, to 15 emerging artists (in architecture, landscape architecture, design, historic preservation and conservation, literature, musical composition, or visual arts) and to 15 scholars working in ancient, medieval, Renaissance, and either early modern or modern Italian studies.

Award recipients spend a year at the academy, soaking up the inspiring surroundings and working. The academy offers the opportunity to examine firsthand one of the sources of Western humanistic heritage, and to engage in a dialogue with Rome’s culture. Among past winners are Jacob Druckman, Bohuslav Martinů, Robert Penn Warren, Hugo Weisgall, David Del Tredici, Aaron Jay Kernis, and Ellen Taaffe Zwilich. (The Prix de Rome, which was so important in Hector Berlioz’ career, is something else: a Villa Medici residence, awarded by the Paris Conservatoire.)

I made a promise to myself when I went to Rome that I would write only pieces I wanted to write; that I would be brave and do things in the music I had been wanting to do for some time, but was too preoccupied and distracted by concerns of what people might think. Also, I wanted to compose works that were more collaborative and less tied to traditional genres. All in all, I did what I wanted and set out to do, and it was definitely for the best.

Rohde describes the Concertino for Violin and Small Ensemble as “an odd piece.” It contains a virtuosic, solo violin part, and the ensemble writing is highly intricate and interrelated throughout. While not a full-fledged violin concerto, there is no doubt that the solo violin is the heart of the piece. It is dedicated to Axel Strauss, whom the composer calls “fiercely patient while awaiting a piece from me over the last five years,” who is also the soloist.

Cast in three movements, the Concertino is modeled on the Baroque concerto grosso technique. In these early ensemble works, the concertino was a subset of solo instruments drawn from a larger ensemble. They would play elaborate versions of the full ensemble’s music, and the solo sections would alternate with the full ensemble (ripieno) passages, giving an impression of the grandiose and public alternating with the 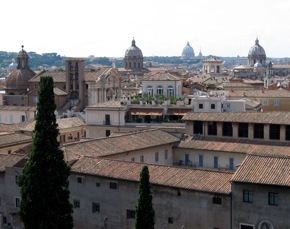 intimate and private. Says Rohde: “In my piece, there are never any ripieno passages: It is all concertino.”

My obligation was to eat well, enjoy Rome, and engage with the life of the Academy, which included lectures, walks, showings, trips around Italy, and impassioned discussions of the work taking place in the many rooms of the villa.

The Academy housed me in a tower apartment in the Villa Aurelia on top of Janiculum Hill, operation central in 1849 for Garibaldi as he fought to organize Italy into one unified country. I could see the three arches of the Forum out of one window, the Michelangelo facade of what is currently a power station out of another, and the park of the Doria Pamphilij and the splendid gardens of the Villa Aurelia out of two others. Perfectly shaped trees and carved hedge arbors, and lemon trees in little square patches of green grass, like a checkerboard from Alice in Wonderland. I am always responsive to grids.

Art critic Rosalind Krauss once argued for the antinatural implication and reductive impact of grids in the contemporary visual arts. She described the obsession as a limiting trend, but I saw and loved them everywhere, in the Renaissance walls, the cathedral floors, the mosaics, in the paving stones of the cobbled streets, in the gardens; and I realize I am part of an old sensibility indeed.

Way collaborated with Rohde on the composer’’s major project during the Rome residence: a puppet opera, 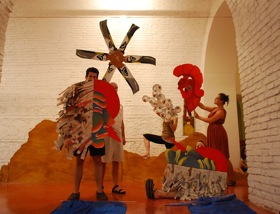 based on the myth of the founding of Rome by the brothers Romulus and Remus. “We spent a huge number of hours in rehearsal, and I have every intention of working with Kurt back in San Francisco — his work is wonderful,” she says.

Reached in Hanoi last month, on a U.S. State Department tour of concerts, Rohde said the Rome residence gave him a big break:

... not having to work and keep all the plates spinning atop the numerous poles; not having to keep track or to portion a part of my brain to multitask all the time in order to be on time, to schedule this and that, be prepared, plan ahead, execute, and constantly be moving, moving, moving. ...

Rome does not move. It accumulates: Some things stay longer than others, some things disappear entirely; it spins in place. It has a lot of motion, but goes almost nowhere. I really loved it and was frustrated by it; it is so not Berlin (which I love to the point of wanting to live there). [Rohde had a Berlin residence in 2003.]

By the time I was getting ready to leave Rome, I knew that if I stayed there much longer, I would not be able to get back to S.F. It was getting under my skin in a way I did not anticipate. In part, I am sure, that was because the American Academy is such a tremendous and accommodating resource for those who go there to work. And my term there was filled with the most lovely, remarkable people, all of whom I have come to adore and respect 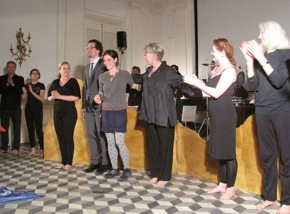 without reservation. My time there was the gift of a lifetime, and gratitude does not begin to express my feelings about it all, even now, nearly half a year after the fact.

What did Rohde accomplish during the Rome residency?

I went to Rome with one goal — to do things with my music I had never done before, either because I was too frightened to do them back in my home environment or had not had the time to execute them in the way I would have liked, given my limited time, energy, and resources here back at home. I am happy to report that the year was a huge success all around. I composed my puppet theater piece, have ideas for a full-length puppet opera, and composed a piece for a speaking pianist, a large ensemble work, and part of the Concertino.

That’s a lot of inspiration and unblocked creativity. No wonder artists have been making the trip to Rome for centuries.