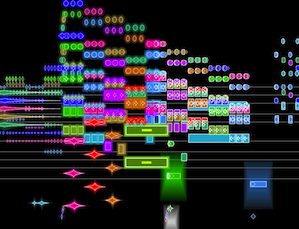 If you want to hear and see a digital display of Stravinsky's The Rite of Spring, Stephen Malinowski has just published it last week as a graphical score. The recording is by Jay Bacal, using virtual instrument software by Vienna Symphonic Library.

Malinowski explains the role of shapes and colors:

In this video, musical pitch (as ordered in the musician's "circle of fifths") is mapped to 12 colors (as ordered on the artist's "color wheel." With this mapping, changes in tonality and harmony correspond to changes in the color palette. Unpitched instruments (bass drum, cymbals, tam-tam, triangle, guiro) are shown in gray. You can read more about this technique here.

Of the VSL, Malinowski says:

The Vienna Symphonic Library (VSL) is a collection of recordings of notes recorded by orchestral musicians, together with software that allows those recordings to be played back in many ways. Each note, on each instrument, at each dynamic level, with each effect (e.g. pizzicato, legato, staccato, crescendo, decrescendo, tremolo, glissando), and with connections to each other note, is included in the collection.

This package is known as a "sampled orchestra" because it includes samples of every sound an orchestral player is likely to produce in a live performance.

Jay Bacal is regarded as one of the (if not the) most skilled users of the VSL sampled orchestra; his realizations are used by the makers of VSL as examples of the best that's being done with their package.

To make a recording such as the one of The Rite of Spring, Jay performs each part separately, using the VSL sounds, recording his performance digitally. Then each recorded part is edited to make it work optimally in the recording. As you can imagine, It is a very labor-intensive process (many more man-hours than having an orchestra perform a piece). The instrumentation of The Rite is especially demanding (Jay's score has 97 instrumental parts, some of which include notes for multiple instruments), and the piece is long. I'm pretty sure it's Jay's most ambitious production. When I was complaining to him about how much work it was to make the animation, he said "The Rite almost killed me too."