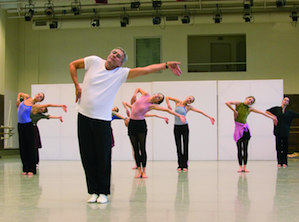 Three of the most innovative contemporary choreographers in the world are Americans whose work has been realized in Europe — all three have strong connections with the San Francisco Ballet.

The most "local" is Mark Morris, 56, from Seattle, who first made his name in Brussels, but has been a significant presence around the world since, with welcome regularity in San Francisco and Berkeley.

William Forsythe, 63, born in New York City, directed the Frankfurt Ballet from 1984 to 2004, and his trendsetting, bold works have been well received here, especially Artifact Suite, In the Middle Somewhat Elevated, and The Vertiginous Thrill of Exactitude.

Wisconsin native John Neumeier, who is turning 74 this month, has been leading the Hamburg Ballet since 1973. The company is due on tour in the War Memorial, Feb. 13-19, to perform his full-length dance drama, Nijinsky, created in 2000.

"I am very happy to return to San Francisco," Neumeier told SFCV. "We have a very important connection to the San Francisco Ballet and Helgi Thomasson. I choreographed Yondering" in 2008 for the SFB School, the company performed to great success my Little Mermaid [shown on PBS Great Performances in 2011], and SFB was our guest in Hamburg last year." 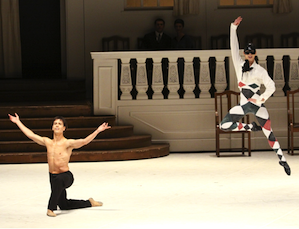 The controversial and much acclaimed Nijinsky, about the tumultuous life of Vaslav Nijinsky, features scenery, lighting, and costumes by Neumeier, who has been possessed by the subject for many years: "It began with a fascination, with a person and a research through my entire life, which has never disappointed me, a puzzle which has still not been solved for me."

The choreographer warns against expectations of a biography or documentary, and he explains what he meant by wanting to make a "present-tense" work:

Ballet is always in the present tense. There’s no step that can say, "Well, this was yesterday or this is what I’m going to do tomorrow." The misunderstanding might be that this ballet is a kind of documentary. What I meant by present tense is to use a technique which is fragmentary, juxtaposing different moments in time, juxtaposing the relationship of the people in his life, sometimes reversing their identity.

For example, there is a scene on the ship when he meets Romola, his wife, and she sees him, but at the same time she sees the Fawn [one of Nijinsky's signature roles]. In other words, her fascination with him is really a sensual attraction to a very sensual man, which he depicted in the form of the Fawn. It’s part of the technique of the ballet that these things are shown simultaneously.

The ballet, an annotators' dream, sometimes feels like This Is Your Life, as characters from Nijinsky's biography (1889-1950) and art intersect ... Ideas often have it over choreography in Neumeier's ballets, but here they fuse with the dancing ... For the most part, thankfully, realism yields to fantasy in the work, which tries to explore something of Nijinsky's creative spirit and inner demons.

(According to an entry in Nijinsky's diaries Diaghilev intended Debussy's music to describe a homosexual encounter between three young men, and Nijinsky wanted to include an airplane crash. The final version of the story involves a man, two girls, and a game of tennis.)

The ballet is set to music by Chopin, Schumann, Rimsky-Korsakov, and Shostakovich — including works used famously in some of Nijinsky’s greatest performances in Michel Fokine’s choreography.