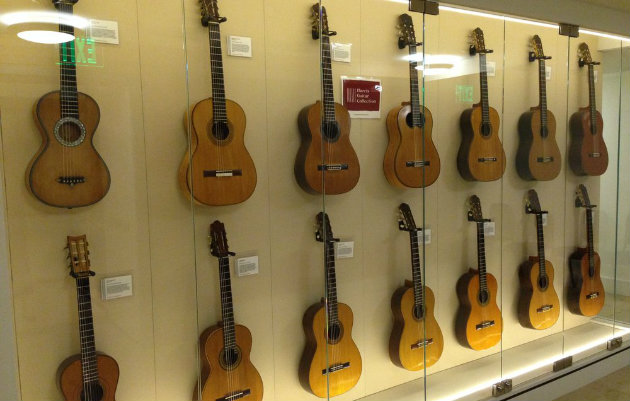 If you’ve entered the San Francisco Conservatory of Music from Oak Street, you may have heard the sound of guitars. And if it was Wednesday afternoon, the sound may have been issuing from the mezzanine, where loaners from the Harris Guitar Collection occupy a secure, climate-controlled glass case. The guitar is the only instrument students are allowed to practice in the Conservatory’s open areas, and the Conservatory is the world’s only educational institution with access to a collection of this sort.

Last week, the guitar and the Harris Guitar Collection and Foundation were also the focus of attention inside the Conservatory’s Caroline H. Hume Concert Hall, on Thursday, Jan. 14, and the Sol Joseph Recital Hall, on Saturday, Jan. 16. The first event showcased faculty member Marc Teicholz’s world premiere (with the New Music Ensemble) of Clarice Assad’s concerto O Saci Pererê. On Saturday, as part of the semi-annual Biasini Guitar Competition and Festival, five of the Conservatory’s students presented a showcase of five of the instruments from the Collection, which over the past three semesters has become an invaluable adjunct to the curriculum.

“I believe that this is the only thing of its kind in the world,” states David Tanenbaum, who has chaired the Conservatory’s guitar department since 1987. “Students have access to vintage guitars, and the art of lutherie [guitar-making] is a part of their experience. A lot of our education is teaching context, and we are giving a palpable sense of this tactile instrument, one of the only ones where you’re touching the strings with the fingers of both hands.”

The collection was assembled by L. John Harris, a real estate investor, author, artist, and filmmaker who has been an amateur guitarist since his youth. He began collecting after co-producing a PBS documentary about the Romero guitar dynasty and began inviting Tanenbaum and Teicholz over to his Berkeley home for guitarrada salons, based on those he’d experienced with the Romeros. In 2004, the gatherings were transferred, with Tanenbaum’s encouragement, to the Conservatory, and several years later the non-profit Harris Guitar Foundation was formed to provide support to both the Conservatory’s guitar program and the Omni Foundation, the principal Bay Area presenter of guitar concerts. 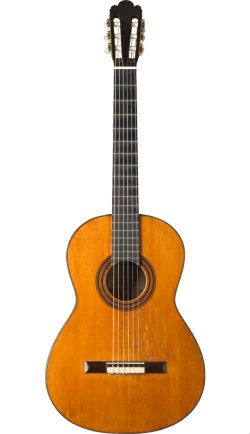 In 2014, the glass museum-style display case was installed on the Conservatory’s mezzanine level to house, at any given time, 14 instruments from Harris’s sizeable collection. “The oldest is from 1810, and I have quite a few from the first half of the 19th Century, leading up to the birth of the modern guitar and [Spanish luthier] Antonio de Torres,” says Harris. Aside from the various Spanish “schools” of lutherie, there are also representatives from French and German traditions and occasional creations by English and American makers. One position in the glass case is reserved for a “featured luthier,” a living and often locally-based artisan invited to pay a personal visit to the Collection to discuss his or her approach with students. On each Wednesday afternoon of the semester, Harris himself comes to unlock the case, host students on the mezzanine, and supervise their hands-on experience of the instruments.

“It’s kind of cool when you see somebody play a few notes, and fall in love,” observes senior Bradley Pupa about those Wednesday student gatherings. “Everybody is an individual, with strengths and weaknesses, and we all have this one guitar, where we innately understand it and don’t have to work as hard.” In his case, it was a 1961 instrument by French luthier Robert Bouchet, which Pupa deployed last Saturday for his performance of the first movement of Leo Brouwer’s El Decameron Negro (1961). “It has a tremendous color palette,” Pupa says about the Bouchet. “It feels and sounds more like a modern guitar, but with a strange hint of the Old World aged sound. I never thought I’d find a guitar like that.”

On his weekly visits to the campus, Harris expounds on the regional and historical influences on the differences  within his collection, three-dimensional and audible manifestations of what the students learn in class. He distinguishes the history of the guitar from that of the stringed members of chamber and orchestral ensembles. “Unlike the classical guitar, the cello and violin were set in stone five hundred years ago, and  everyone’s just trying to duplicate those,” says Harris.

I’m talking about the Stradivari, the Amati. A big part of why I’m trying to keep the old guitars alive is because they’re not the same as contemporary guitars, which have been evolving ever since Torres [1817-1892] set the modern ‘Stradivarius’ pattern. He pulled together, into one form, all the best structural and acoustical elements that had been brought in before him, by this or that luthier. His instrument could express a classical repertoire to a large audience for the first time.”

Torres was represented in Saturday’s showcase by an 1888 model, in a performance of Manuel Ponce’s Prelude in E Major, played by master’s student Chun Xie. The Torres guitar “was louder and had a deeper bass” than earlier instruments, Harris points out. “It also had penetrating trebles, because it had a longer string length and a bigger and deeper body. [Torres] set the proportion of the upper bout [the top curve of the guitar] to the lower bout to maximize the vibrating surface of the instrument, as well as the placement of the sound hole and the placement and mechanics of the bridge, the height of the strings, and the angle of the neck.”

The Torres-style guitar, as adapted in 20th-century Spain, became familiar to classical music fans, including then-UC Berkeley student Harris, through the performances and recordings of Andrés Segovia. For the past 50 or 60 years, contemporary luthiers “have been trying to make a guitar that will project itself more on stage and be heard in ensembles and with orchestras. They’re doing experiments with the bracing of the guitar, and with construction of the tops, some of which have double-tops, sandwiching two very thin pieces of spruce. Sometimes they’re adding non-wood materials, so that they are lightweight and super-strong. But you can sometimes get the sound of plastic, instead of the sound of wood.”

Harris points to the Collection’s upcoming featured luthier, Steve Connor, based on Cape Cod, who has fashioned guitars for Angel Romero, who is now performing as a solo artist, separate from his family. Harris bought one of Romero’s Connor instruments, and Teicholz used it to premiere the Assad concerto, sponsored by the Harris Foundation, the Conservatory, the Omni Foundation, and other sources. “Connor plays with bracing and structure, but never introduces non-wood,” says Harris. “His guitars have the Torres sound, but many modern players go crazy for them, because they’re very loud, very clear, very even, and beautifully made.” Jeff Wells, an alum of the guitar department, recently donated a Connor  to the Conservatory’s own collection, available to students on loan.

The Harris Foundation is contemplating yet more innovative collaborations with the Conservatory. By the end of this year or early in the next, announces Harris, “We’ll be launching a project where a guitar will be made by a local luthier with students being present at various stages of production. The students will be able to say, ‘We want a guitar that sounds like this, that has these particular properties,’ because that’s what guitarists have always done with luthiers. The result will then be part of the rotating stock of guitars, for students to borrow.”

In addition, “I’m thinking about how a guitar foundation could imitate what happens with violins and cellos, where great instruments can be loaned out to worthy players. Can the guitar enter that world?” Preparation for this service, which Harris considers rare in the guitar world, of course involves setting up insurance and liability contracts. “But part of my job is to make sure these instruments get used for making music,” Harris insists. “I want them to be tools, and I want to protect them as artifacts at the same time.”