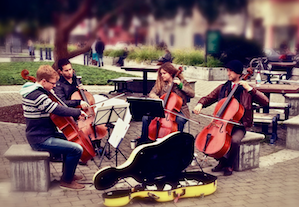 The aptly named Cello Street Quartet consists of four cellists who liked playing together and put together some arrangements, which they tried out in street performances. As Andres Vera tells it, they were out there on San Francisco’s Castro Street in front of Cliff’s Variety Store, when they were spotted.

“One of the biggest opportunities, first opportunities, that we got as a quartet, we were flown out from San Francisco to New York City by Levi’s — the Levi’s jeans company — and they had us perform at the spring editors’ [meeting], all expenses paid. That was one of our first gigs. I guess you would say that really solidified our ensemble and was really motivational to [our] continuing to perform together,” said Vera. “Someone, actually the creative director of Levi’s, saw us in the Castro and I guess he liked us and was, like, ‘I’m going to fly you out to New York City.’”

Busking, or live street performance, happens all over San Francisco, and if you’re a regular commuter, chances are you recognize the performers who greet you with a nod and a song at your BART station. Some of them you want to ignore, but others have real talent and a few — especially if they’re pouring out classical tunes — are students at the San Francisco Conservatory of Music.

Playing on a street corner isn’t the “it” thing, because it can be downright uncomfortable, especially for first-timers. Yet busking is passed on by word of mouth or by invitations from friends. Mia Nardi-Huffman, a junior at the Conservatory and a violinist in The Castro Chins quartet (they have an extra violist instead of a cellist), began busking with her violist roommate as a freshman, after hearing about it from upperclassmen.

A New Kind of Performance Anxiety

“[It was] kind of scary at first; I’ll be honest. Definitely there’s some, you know, vagabonds and homeless people at the Muni stations. At the time, I was an 18-year-old girl with another 18-year-old girl, and we just had this case of money in front of us. It is a vulnerable place to be but I really enjoyed it. And over the years, the feeling of being scared has gone away and I just enjoy playing for the commuters that are just really excited to hear Mozart at 8 in the morning when they’re on their way to work.”

“Here, it’s just people that are going about their day and you have to figure out a way to play that more or less catches their attention as they’re going by” – violist Omar Shelly

Safety concerns can be remedied by going as a group or with a few more friends. Besides that, Omar Shelly, a senior violist at the Conservatory and fellow Castro Chin, doesn’t think there is anything to worry about. He began busking with friends who’d already busked before and asked him to come along.

“There’s no anxiety about it; I don’t think so,” said Shelly. “There’s different city ordinances that maybe you can’t busk in certain places. But if you get apprehended for that, you can get a ticket for 250 bucks, or something like that. But once you know the spots like that, there’s not really much to be afraid of.

“And then, as far as playing for people, it’s kind of the opposite,” he went on. “It’s still a performance but it’s kind of the opposite of the performance. It’s like, if you do your performance at school, it’s a set audience. They’re sitting there to listen to you. There’s no question about it. Here, it’s just people that are going about their day and you have to figure out a way to play that more or less catches their attention as they’re going by … [get them] to actually acknowledge your playing. … It’s a different kind of perspective. So, there’s no reason to be nervous about it.” 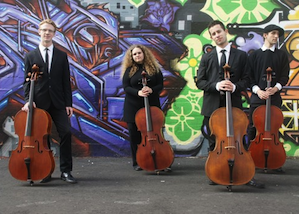 Although it can be nerve-wracking to play for preoccupied passersby, a lot of busking comes down to a musician’s ability to make the most of the experience. For the Cello Street Quartet, playing music informally is simply more fun.

“I could see the potential, [and] I knew that this type of connection was comfortable,” said Matthew Linaman of CSQ. “It’s speaking with and being vulnerable as a performer, which some people may not be ready to do for themselves or for other people. But playing music is hard, and we love it, and that’s why we do it. Performing in concert halls, we love that too, but something [that] started off as truly a fun thing to do on a Saturday night — you make some money, you get to hang out. It was, like, a release from all the stress of the week, from practicing and being under intense pressure, and just getting to go play with friends on the street. It was just fun!”

For people not so enamored of meeting strangers on the street, or playing only for fun, the job can be hard.

“I feel like people just [busk] because they [want] a source of income,” said Nahuel Bronzini, a guitarist originally from Argentina. “Mostly string players. They get the most — a string quartet [or] people who do that. … Busking is hard: It’s so loud out there and the instruments are very quiet … and you literally have to push very hard to make the sound go through the subway, which is a pretty loud environment. So, I think that basically they busk because of the money — I don’t know. I don’t think there’s [that] much to [it].”

“Busking is just a great way for us young people to have the extra money to go see a movie or go out to eat with our friends.” – violinist Mia Nardi-Huffman

“I do think for me right now, busking has been a great way to supplement my income for school,” said Nardi-Huffman. “All of us, we’re living in the city of San Francisco, which is so expensive, and we are college students. We have a lot of expenses that come with that. So for right now, busking is just a great way for us young people to have the extra money to go see a movie or go out to eat with our friends.”

Depending on the night, busking might not even buy you dinner. But, as the Cello Street Quartet found out, it can lead to networking opportunities and future gigs you couldn’t get otherwise.

“I’ve met a lot of interesting people and, yeah, I get gigs,” Shelly said. “I carry cards with me, and maybe like two or three people come by, asking, ‘Do you do private events? I work at this company, and we have these meetings sometimes and they’re really dry, like managerial meetings. So, it would be really cool to have somebody come in and [play] music and it would actually make it really nice.’ Those kinds of networking things. That’s cool, and it’s extra income, which means extra food.”

“Three members of our quartet played an AIDS Emergency Fund Benefit this [past] fall,” said Nardi-Huffman. “That was a really, really great opportunity for us. I guess one of the party planners noticed us. He was in the Castro, we were busking one night, and he asked for my friend Omar’s e-mail address. And he [went] and set everything up. He said that we were just playing for a party. I had no idea. So, we walk in and it’s this really extravagant, big-deal event and it was just a lot of fun. All of the guests were really excited to see younger people. …We definitely weren’t the standard string quartet that you hire for weddings. We were a little bit more urban. So it was pretty cool.”

Many young musicians understand that being a professional nowadays means being entrepreneurial. So busking may seem like merely one more opportunity to be heard. A gig may or may not result, but more people will hear the music in open, public spaces than would in a practice room or the Conservatory’s recital hall.

“It’s definitely better to go, because you want the exposure, even just the experience of playing something,” said Nardi-Huffman. “We have end-of-the-year exams and recitals coming up. Busking is a really good way for us to go out and play the repertoire that we’re working on before we have to play it for the intimidating row of all our teachers or all of our classmates, and we’re getting graded on it in some cases. It’s a really good way to get the music out there in kind of a casual setting. Yeah, but definitely you can’t rely on it.”

“It’s sort of scary, looking around at all the people I’m going to be graduating with and how some of them really can’t visualize surviving as a musician, or they don’t have a plan,” said Shelly. “They’re just kind of going with it. In the real world — we’re already living in the real world; we’re just in this little bit of a bubble by being in school — but the fact that they’re not aware of that. … It’s kind of disconcerting. The moment it kicks in for them is, like, ‘Oh crap, I have to pay bills or whatever, dah, dah, dah. How am I going to do that? What am I good at?’”

“Life only gets harder,” Vera said with a laugh. “And we’re so young right now that we do have a chance at making sure we’re doing the right thing so that we do have a job. So for example, I would totally encourage everyone to start a business or to become affiliated with a nonprofit. These things are so important just now simply because you have to essentially create your own job. And you have to basically create the demand for yourself. Unless I win a job or I am touring — I wouldn’t be talking to you over the phone if I was touring! — I have to create my demand, and I have to make what I do important to everyone else.”

“I have to create my demand, and I have to make what I do important to everyone else.” – cellist Andres Vera

Busking Tips: Michael Turkell of the Castro Chins suggests a bit of planning beforehand. “Map out when you go. Map out where you go and what time. Obviously, the more ‘noise’ you make, the better. [And] don’t look unhappy!” In addition to bringing a couple of friends, make a few more with the musicians who frequent the area. There’s enough territory to go around.

Where to Hear the Musicians in This Article: Both the Castro Chins and the Cello Street Quartet can usually be heard in San Francisco’s Castro district on weekends, near Cliff’s Variety Store. Updates on each group can be found, respectively, on the CSQ Facebook page and on Twitter at @thecastrochins. Bronzini and Shelly can be contacted directly via e-mail for their services.