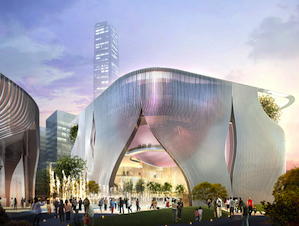 HK$ 2.7 billion in local currency, the budget for Hong Kong's Xiqu Chinese Opera Centre is $348 million, and that will be just the first of 17 cultural and entertainment venues to form the HK$ 23.5 billion West Kowloon Cultural District.

Vancouver-based Bing Thom Architects and local firm Ronald Lu have beaten out rival studios headed by architectural superstars Norman Foster and Moshe Safdie to build the opera house. The preliminary design features a spherical theater that appears to float above an atrium. The exterior covering of the structure appears to undulate as if it were a theater curtain. It is scheduled to open in 2016.

Also known as the Museum of Visual Culture, M+ will house 20th- and 21st-century art, design, architecture, video, and sound installations. It is intended to be Hong Kong’s answer to the Centre Pompidou in Paris or the Guggenheim in Bilbao, and will address the longstanding complaint that Hong Kong remains something of a cultural desert.