A stark mad king, screeching, chittering and raving. An intergalactic Arkestra sounding the cosmic strains of Saturn. A team of all-stars merging their music with field recordings. A gaggle of young composers honing their craft. Meet just a smidgeon of the lineup of Bang on a Can’s inaugural LOUD Weekend, which ran Aug. 2–4 at the Massachusetts Museum of Contemporary Art (MASS MoCA) in North Adams.

LOUD is the next evolution of Bang on a Can’s annual new-music marathon, created by composers Julia Wolfe, Michael Gordon, and David Lang in 1987. No longer constrained to a single day, the LOUD weekend featured performances in a range of auditoriums and gallery spaces around the museum and capped a three-week festival for early career musicians looking to delve deeper into the world of contemporary music. Last summer, Bang on a Can began inviting small cohorts of music journalists to attend the final week of the festival to workshop writing about new music and develop relationships with the next generation of performers and composers. I attended this year’s program as a media fellow, embedding into rehearsals and sampling from daily recitals and seminars, trying to absorb as much as I could.

So, to business. What’s new in new music?

First let’s consider the pair of world-premiere concerts where each of the festival’s eight composition fellows premiered a brief work for chamber orchestra or small ensemble. Many of this year’s crop of composers are from outside the US, and a couple wove traditional stylistic elements in to their pieces. Greek composer Rafailia Bampasidou built her piece using ancient folk dances and poetry, and South Korean composer Soo Yeon Lyuh’s music used wide vibrato and microtonal pitch bending, similar to the music produced by the haegeum, a two-stringed, fiddle like instrument. (Lyuh is an accomplished haegeum player herself and delivered a stunning set on Friday.)

Other works were more abstract, like German composer Sophia Yanni’s We Maybe Catch Fireflies, or Maybe We Won’t, a languorous affair with yawning string glissandos and bright, flickering wind interjections. Celia Swart, currently based in the Hague, took inspiration from soap bubbles — her piece had a suspended, out-of-time feeling, and built to a delightful, audible “pop!” sound at points. The two American composers, Phong Tran and Darian Donovan Thomas, both used text to explore issues of identity and their place in the world, using the orchestra to emphasize and highlight their words.

There were no program notes at the festival, which stuffed so many diverse acts into the weekend that it wasn’t uncommon for simultaneous performances to occur in different spaces. In lieu of program notes, composers or performers would take a beat to introduce the next work to the audience. Most ended with a variation on “I hope you enjoy the piece.” This is innocuous, but perhaps bears some unpacking, especially given one of the other consistencies of the festival: walkouts. From the opening performance of Julius Eastman’s sparsely textural Gay Guerrilla, listeners left the halls and spaces in droves. Some may have just needed a break, some were likely just trying to arrive at the next concert on time, and some likely left because they were not, in fact, enjoying the piece.

Given the sheer scope of music at the LOUD weekend, it wasn’t difficult to move on and find a whole new genre to sample. There wasn’t a dominant strain of new music; rather the defining feature of the festival seemed to be the breadth of contemporary music. There was minimalism. Post-minimalism. Tonality. Atonality. Electronic music. Acoustic music. Electroacoustic music. Guided improvisations. Ambient music. Experimental music. Multimedia works. Works that toed the divide between indie rock and more “classical” contemporary music. And music that employed tech. 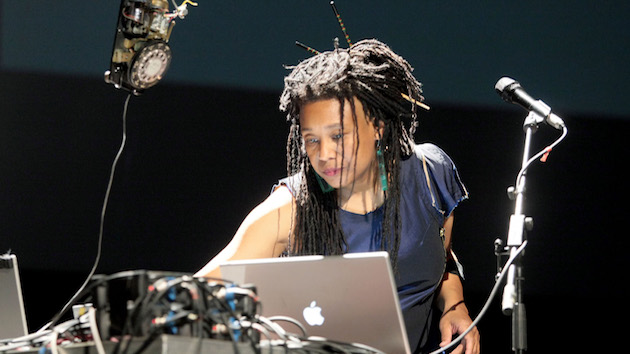 Lots of this last category, in fact, with longtime Bang on a Can collaborator Pamela Z perhaps providing the most captivating example. She brought a level of musical sorcery to her sets, waving her hands at motion sensors programmed to produce different sounds and looping and modulating her voice to create her unique brand of music, weaving in video clips at times. One of the festival’s standout pieces was her collaboration with the Bang on a Can All-Stars for her 1998 work The Schmetterling, a fluttering, vividly programmatic work that blends video, spoken-word, operatic signing, acoustic instruments, and technology into a cohesive final unit.

Also on the techy side, the guitar quartet Dither delivered performances of music by Brendon Randall-Myers and Tristan Perich, both New York-based composer-guitarists, but polar opposites in terms of musical style. Randall-Myers’s Dynamics of Vanishing Bodies struck at the audience with a wall of noise, intricate and varied, an exploration of the physicality of sound and how music is processed by the brain. By contrast, Perich’s piece, Interference Logic, paired the quartet with simple, one-bit sound oscillators — these were either “on” or “off,” but by varying rhythmic striations and the quartet’s harmonies, Perich achieves a laser-focused clarity of tone, both hypnotic and fascinating.

On the more acoustic end of the spectrum, Annea Lockwood’s Thousand Year Dreaming began with antiphonal didgeridoos in one of the gallery performance spaces, later adding conch shells and a gong and more modern instruments to set up rolling waves of sound. And Peter Maxwell Davies’s seminal Eight Songs for a Mad King is as physical as a performance can be, with its madcap, five-octave baritone part.

The Bang on a Can All-Stars performed a range of material from their 2015 Field Recordings album, commissioned from composers around the world to write new music over pre-existing recordings. Julia Wolfe’s foot-stomping, finger-snapping Reeling remains a highlight, layering clarinet and guitar and piano over some cheerful, tuneful, mouth music. In the final concert, David Lang’s Prayer for Night and Sleep proved enchantingly sonorous, with breathtaking, lyrical vocal and cello solos leading a small orchestra. And Michael Gordon’s Dry kicked off a static beat, layering and interlocking different rhythms atop one another and drawing the ear along with brief bursts of color. Here, the ensemble’s rhythms didn’t always seem precise, but this didn’t diminish the effects of the piece.

And that’s just the surface — there was music by Brian Eno and Hans Abrahamsen and Philip Glass. There was a street band and an orchestra of original instruments (mostly pipes and tubes and balloons) and Found Sound Nation. There was a blazing, acrobatic performance by the Sun Ra Arkestra. And aside from the performers, MASS MoCA itself chimed in with its resident sound installations, like Julianne Swartz’s Inharmonicity, The Tonal Walkway, a covered bridge with a postindustrial feel that spans the museum entrance to the galleries and plays amateur singers and Roomful of Teeth singing different tones and fragments.

There was plenty of “new” music during the LOUD weekend, but little of the “newest” music aside from the world-premiere concerts. Some of the composers brought recent works, but the rawest, freshest offerings happened even before the festival began, during the daily lunchtime and afternoon recitals put on by the fellows, also open to casual passersby at the museum. Here were composers working gamely to find and hone their voices, here among the galleries and in the hotel basement and in the rehearsal room that doubled as a laundry room. This was the music that felt most experimental, perhaps a touch unrefined, but charged with creative enthusiasm and zeal.