In the intermission after all the singers had finished, Bea stood in the corridor shadows, in her hunter-red usher’s jacket. “It’s a battle of the sopranos,” she said, shaking her head. “I don’t know how the judges will decide.” 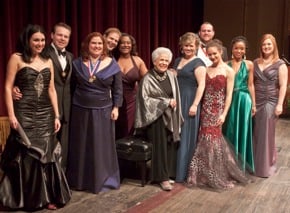 Bea has been an usher at the California Theatre in San José for eight years, ever since the place reopened. And an opera buff ever since she first saw Carmen in Western Pennsylvania, many years ago. She knows the Irene Dalis annual competitions very well.

“Of course, I hope Jasmina wins,” she added.

Jasmina Halmic, a sensuous brunette from Bosnia-Hersegovina, stars with Opera San José and gave a smashing performance in this fifth annual Dalis vocal competition. While others stood leashed to the piano, Halmic, as Mozart’s Electra, moved around, at once in heat and then in dread, singing “Tutto nel cor.”

It seemed every soprano on Saturday night was hot. And there were seven to choose from. Seven out of 10 contestants: the other three were men, two baritones, and a tenor.

The very first singer was Shawnette Sulker, a Bay Area soprano, originally from Guyana. She was sinewy and lithe; you thought of Edith Piaf. If her voice didn’t quite fill the theater in a conventional way, what she did with her voice, a kind of operatic scat, was amazing, particularly when she sang Carmen’s “Je dis, que rien ne m’epouvant.”

And then there was Jouvanca Jean-Babtiste. None of the contestants had more personality, more expression, particularly as Electra singing “Oreste, d’Ajace.” If Halmic’s Electra was sensual and desperate, Jean-Babtiste’s was pure psychopath. She was riveting. 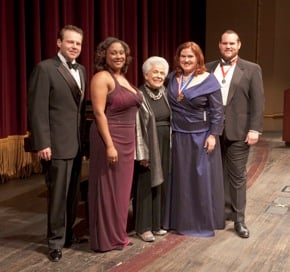 By the rules of the competition, contestants brought a repertoire of five or six selections; the first offering was their choice; judges chose the second. Jean-Babtiste was asked to sing “Traft ihr das Schiff im Meere an,” from Der Fliegende Hollander. Not unexpectedly, she took the Wagner prize at the end of the evening.

The last contestant in the competition — which featured ten out of 90 entrants — was Alexandra Lobianco. She was listed on the program from Russia, presumably because her hometown is St. Petersburg. In fact, she’s from St. Petersburg, Florida.

She arrived on stage with eight songs in her repertoire — that in itself was imposing. And if sound were the only standard for the competition she won that before Daniel Lockert, the accompanist had turned the first page. For some, it was almost too much. A lady down the row commented at the end of the singer’s presentation, “With that voice she could break a glass in France.” It wasn’t clear whether she meant French glass was stronger than American glass or whether the sound was so sharp it could reach Paris all the way from San José.

According to Bea there were 500 in the audience, out of 649 seats in the orchestra. Judges had the mezzanine to themselves. It was a night at the opera but in low-key Silicon Valley fashion. Women more formally dressed; men in blue jeans and windbreakers.

At the reception following the competition, Irene Dalis, general director of Opera San José, took a moment to address the matter of an aging audience. She sat in a wheelchair, still recovering from a hit-and-run accident last October that shattered leg bones, broke 15 ribs and led to many surgeries. She looked vibrant and was her feisty, no nonsense self.

“Opera has always appealed to people over 45, always did, always will,” she said.

“Well maybe not always. But right now it’s not wise to spend a lot of marketing dollars to get 20-year-olds. First of all, it’s too expensive; second of all they’re just not interested. It takes a certain maturity and sophistication, and development to appreciate opera. At the same time, this is why we go out to the schools, less in the hope they will come now to the opera but so that they will know that this art form exists.

The problem of aging is not with the audience it’s with the sponsors. I just don’t know what to do about that. But then you consider that this art form has lasted 400 years. I think it’s going to stay. You know, when I was a child there was only the San Francisco Opera, the Metropolitan Opera and Chicago. A singer then didn’t have nearly the chance a singer does now.”

One of the interesting qualities of the Dalis competition is that while the charter in the original mission statement was to discover “young,” emerging talent Dalis herself took out “young.” The competition is open to any age.

“It was my decision,” says Dalis. “Some dramatic voices don’t even start till they’re 38 or 39. The great German singer, Martha Mödl, for example. Or last year’s winner of the Wagner award: Silas [Elash]. Actually, it was for him that I took out the adjective ‘young.’"

“He understands that the chances of making a world career are slim. He knows that, but this is something he enjoys and he does it very well; and actually you can’t tell where it will go because he’s so good.”

Silas Elash was 45 and a systems programmer at Sun Microsystems when he started taking voice lessons with his 15-year-old daughter. After just a few months he began to realize he had this “god-given” talent that became his “bliss.”

“I had this vision that it was possible. And I still have things I think I might be able to do. The Holy Grail is to sing at the Met. Could I do that? I don’t know but the way to find out is to just go on to the next challenge, be persistent, let your dreams empower you, but don’t let them take you away from reality.”

Before the competition we caught a few moments in the theater lobby with one of the judges, Lotfi Mansouri. In his oversized glasses he looked the part of an impresario, not unlike the producer in Fellini's 8 1/2. Mansouri, the former general director of San Francisco Opera, was delighted with the competition and pointed out how much it means to artists to get some money, especially when teachers and coaches charge $100 an hour these days.

But he also expressed dismay at the state of culture in America. He holds the honor of the Chevalier of the Order of Arts and Letters bestowed by the French government, and pointed out that France, with a population of 60 million, has a budget for the arts of $2 billion, not to mention a minister of culture. In America, with five times the population, the National Endowment of the Arts has a budget about $140 million and that may yet be cut.

“When I was the general director of San Francisco Opera, my last budget, in 2001, was a little over $60 million. Do you know what was the donation from the NEA? It was $25,000.” He repeated that figure.

“But you see this is what the Republicans are always saying, ‘Opera and the symphony are for the rich; let them pay for it.’ And as ticket prices for the opera reach $200 the viciousness of the circle only increases.” Mansouri looked away. He sees himself not as a pessimist, but as a realist.

“When you go to Vienna, for example, you go to the symphony, the opera, the museums, you see how culture defines a nation. But in this country, populist culture rules. Lady Gaga, Justin Bieber. There is no room for high culture. And now in this political climate, to be intelligent, much less an intellectual has become derogatory. I find that very sad. We just go to the lowest possible denominator; we are belittling the potential of this country.”

And Now, the Winners 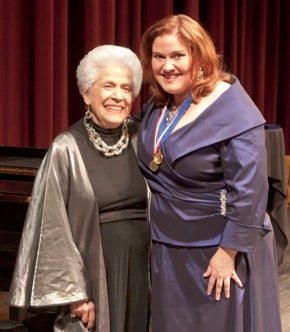 The judges took so long to decide the matter that eventually the audience began to clap. Then the men finally appeared. Third place went to Christopher Bengochea, a tenor from Montana. Second place to Evan Brummel, from California. He was the most expressive of the male singers. And finally first place went to Alexandra Lobianco, who was also the audience favorite.

“I was as a shy and introverted kid — if you can believe that,” Ms. Lobianco said, standing regally in the middle of the reception. “I was the fat girl and always made fun of. So the stage became my escape. I could become these extraordinary characters, these people I wasn’t. And it was safe.”

As it turns out, Turandot is her favorite character. “Who I don’t think of as an ice queen but rather as a scared little girl who’s protected herself with layers and layers of ice. But ice that can be easily broken. I identify with her because she’s protecting herself; she does that by being mean and fierce. Then she meets Calaf and the crack begins. And when Liù kills herself the ice begins to melt.

“Over the years I’ve experienced marriage, divorce, moving. I keep coming back to this notion of melting and rebuilding. Blooming, for lack of a better term. And tonight I find myself humbled and awed. This is the second major competition I’ve entered and won. It’s all happened in the last year. It’s been an incredible year for me.

“Turandot is a flower that’s been covered in ice and finally blooms at the end and in a way it’s just tonight the ice is breaking for me and I’m blooming. Spring is here. It’s very scary, heady, and at the same time, I am right where I’m supposed to be.”

Ms. Lobianco’s father is a judge, her mother an attorney. Alexandra was adopted. The only thing she knows about her biological mother is that she was a singer. But what kind, she doesn’t know.