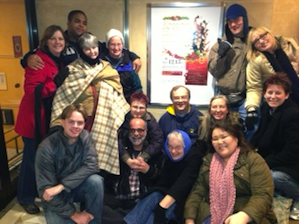 From James Meredith, on the Japanese tour of his Sonos Handbell Ensemble:

We received an icy reception from Mother Nature on our way to the second concert in Uonoma on our 7th tour to Japan last night.

Heavy snow from a formidable blizzard accompanied us on the bus trip from Niigata to Uonoma, a city known for its premier rice, situated amidst a winter vacation area with hot springs and ski resorts. Over six feet of snow lined the icy roads as the snow fell heavily at a 20 degree angle. The trip, which normally would take an hour and a half, took well over three. Coming back was even worse.

Cellist Emil Miland's 19th-century cello, "Nestor," took the frigid weather in stride and had no complaints after warming up in the 1,000-seat concert venue. Again, the hall had amazingly wonderful acoustics. Built in 1998, the sound was brilliant and alive at every point in the room. I don't know why the Japanese can get it so right time after time in their many halls and in America we have such consistent acoustical problems with the few halls we do have. 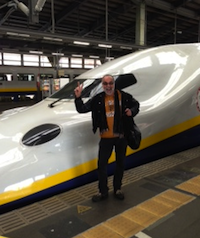 It might have been icy outside, but inside the people inside were warm and unusually demonstrative for the typical Japanese audience. It's not that they are not feeling it, but their culture reserves large displays of emotion for the TV soap opera series and game shows.

They especially appreciate "Smirti" (Sanskrit for Remembrance), the work that I wrote for Emil in honor of 9/11. It begins with the cellist entering the stage quietly and sitting with his eyes closed. A community of people sits around him. He begins with music from another world, a world where spirits who have lost their life are trying to understand what just happened to them.

A deep low song comes from the cello as the other players bring the support of the whole community and recount the events that have just happened. The cello reflects these events in a very strong, agitated section which eventually returns to the deep consoling song that brings strength and courage.

Smirti was dedicated to the Japanese people in honor of their deep strength and courage.

Uonuma experienced a severe earthquake six years ago so this sentiment was especially meaningful to them. The manager pulled me aside after the concert and said that many top ensembles come and perform in this hall, they play beautiful melodies expertly, but that they do not touch his "bliss" (his word), they do not touch his heart. The joy of music making that Sonos displays did. You can't hope for any better reaction than that. That's why we do what we do and it appears to be working.