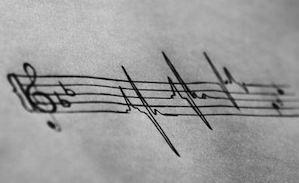 The stage lights are bright, adrenaline is flowing, and there is complete silence in the audience. This is the moment you’ve worked so hard for, the culmination of countless hours of practice. But of course, there’s that nagging thought in the back of your head: “What if I mess up”?

One of the most important aspects of performing is the quiet before the storm. In other words, before you are even at the instrument and during those precious moments on stage before you start to play, it is vital to collect yourself and just breathe. Performance is not just a show of technical and musical virtuosity, but also a psychological challenge. There is a reason that musicians practice so long and hard. It is to build muscle memory and to prepare for the inevitable jitters of a performance. I find that, even though it takes a little bit of time, if I use a few moments to slow my heart rate, I am able to be calmer and less frantic when I begin.

But there is also that moment that makes your heart stop. Your finger slips, you get distracted by a cough, or the rustle of a program from the audience, or your mind just goes blank. You make a mistake. The first thing I remember to do if that happens is to keep a game face. Chances are the audience didn’t notice, but if the performer stops, or grimaces or makes a noise, then they know something is wrong.

The second thing to keep in mind is to keep going, no matter what. Before a concert, I often practice the “Stop and Go” method, during which I stop in quite random places in my piece and see whether I can start again. This prevents the possibility of making a mistake and not being able to recover and lessens the chance that the entire performance might get sidetracked.

The most important thing to remember about making mistakes is that it is not the end of the world. Before and during a concert, a performer should be focusing on the music and how to make the performance go well, not worrying about what happens if things go wrong. Often the obsession over making a mistake leads to more mistakes because that is all the mind can think about. However, one small mistake does not ruin the entire performance. One of my chamber coaches reminded me that if I do make a mistake, I should play the next 10 measures the most beautifully I’ve ever played them. Even if it is easier said than done, try not to stress about what might happen. Instead, relax and enjoy the music.

Yoko Rosenbaum is a 14-year-old pianist and writer from Los Angeles who has participated in the Young Performers Program at [email protected] for the past four years.