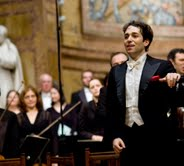 That headline is taking liberties with chronology, but it conveys the spirit of the enterprise: Philharmonia Baroque's next round of concerts, Nov. 15-19, is called "Music from Imperial Saint Petersburg," presenting works by some of the earliest Russian composers.

The programs include Berezovsky's Symphony in C Major; suites from Bortniansky's Alcide and Le fils rival; the Facius concerto; "Dance of the Blessed Spirits" from Fomin's Orpheus; and three arias by Glinka.

If other than Glinka, these names are as unknown to you as they were to me, there is help on the orchestra's website.