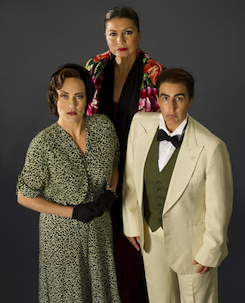 But in this universe, it is now Opera Parallèle — now that Artistic Director Nicole Paiement's adventurous organization has renamed itself. The organization is also expanding its operation to a full season.

Opera Parallèle begins 2013 with the Bay Area premiere of Osvaldo Golijov’s Ainadamar, Feb. 15, 16, and 17, at the Yerba Buena Center for the Arts. Soprano Marnie Breckenridge heads the cast as Margarita Xirgu; mezzo-soprano Lisa Chavez is the poet and playwright Federico; the choreographer is La Tania.

On April 26, 27, and 28, the company presents the local premiere of Garth Sunderland’s re-orchestration of Leonard Bernstein’s 1952 Trouble in Tahiti "in a double bill" with Samuel Barber’s 1959 A Hand of Bridge at ZSpace. (The quotes around double bill, which is what the announcement calls the event, is in consideration of the fact that the Barber runs under 10 minutes; the Bernstein is about 40 minutes, so there may be an attempt here for a record-short double.)

During the fall, Opera Parallèle launches community engagement activities beginning with a return visit on Oct. 26 to the Friday Nights at the de Young program. The company's Hands-on Opera Program begins next month, with and at Drew School, with The Araboolies of Liberty Street on Nov. 2 and 3, at 7 p.m., free and open to the public. With music by Ronald Perera, libretto by Constance Congdon, the opera is based on Sam Swope's book about the neighborhood ruled by the mean couple, Gen. and Mrs. Pinch.