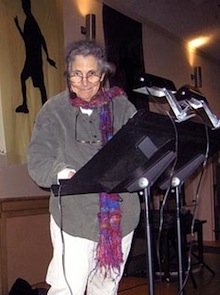 Arlene Sagan, 84, died on July 5 in her Berkeley home, where she lived since 1955. She was music director emeritus of the 180-plus voice Berkeley Community Chorus and Orchestra (BCCO), which she directed from 1988, when it was a 30-voice group, until her retirement last year, and of Bella Musica Chorus — just two among many Bay Area musical groups and projects with which she was deeply involved.

With the news of Sagan’s death, members of Bella Musica gathered at her home to sing in commemoration of her life and work. Ann Callaway, Bella Musica composer in residence, remarked: “When we all got together, we went up to her room where she was lying and sang for her, and the words to Sibelius’ ‘Finlandia Hymn,’ about ‘love’ and ‘community,’ seemed so ... her. ... We even managed to do ‘How Lovely Is Thy Dwelling Place’ from the Brahms Requiem.”

Tributes and memorial statements poured into the organizations Sagan led, recalling (as Callaway put it) her “very deep personal connections with people through music, her dedication to music” itself, and her longtime, firm commitment to include amateur singers, including many who couldn’t read music or who’d never sung before, in practice and performance of “major, difficult choral works, such as Brahms’ Requiem and Orff’s Carmina Burana.”

“‘Community’ was a word Arlene lived,” wrote Peggy Hart, Bella Musica’s president. “Twice a year, people flocked to the free BCCO concerts. Families would stream down the street toward St. Joseph the Worker Church in Berkeley as if it were the County Fair. Brahms, Bach, Schubert, and Mozart never had it so good.”

Cristin Williams, a Bella Musica board member, noted: “She believed firmly that everyone can (and should) participate in making music. ... The standing rule at BCCO and Bella Musica concerts [was to end with] a sing-along with the audience, [who] often looked baffled (or nervous) when the chorus left the risers to join them on the floor and this tiny, intense woman commanded us all to ‘Sing!’ But there was no escaping it with Arlene: In music and in the world, we’re all in this together.”

Laura Glen Louis told of how easy it was to get caught up in Sagan’s own organizational community. When Louis approached Sagan to fact-check some research, “someone stuck a score in my hands and I ended up singing and signing on [with BCCO]. ... Three years later, I was board president for Bella Musica. ... I’d never served on a board before, let alone run one, but Arlene thought I’d be good at it.”

And Tony Drummond, another past president of BCCO, who sang with that chorus, as well as with Bella Musica, recalled: “One of Arlene’s phrases was the Zimbabwe proverb, ‘If you can walk, you can dance — and if you can talk, you can sing.’”

Sagan repeated the adage and reflected on its meaning to her work during an interview with the Berkeley Daily Planet in 2004: “Singing is the most wonderfully satisfying spiritual experience. You mingle your breath together. ... There are three things that make BCCO unique as a choral group: Neither audition, musical education, nor vocal talent are necessary for membership. ... That usually means you don’t have to read. But we have people who can barely carry a tune. We’re willing to work with them. They don’t sing when they don’t know the music. And because of the fact that we do good work, and are very, very dedicated ... we have graduates of music departments as well as people who’ve never seen a note before.”

As the late Julian White, concert pianist and teacher and “an Arlene Sagan booster,” put it in the same article, “It’s right out of a fairy tale: ‘If you don’t know how to sing, or you don’t know how to read [music], don’t worry, we have free classes.’ And she’ll teach you. I think that is a very seductive embrace. ... You get accepted without having to fill out some huge IOU.”

Helene Whitson, president of the San Francisco Lyric Chorus and founder of the Bay Area Choral Music Library, keyed in on Sagan’s erudition, her practicality, and her constant search for the meaning of the music and how to perform it, when Sagan rehearsed Charpentier’s Messe de Minuit in the early 1990s: “A lot of French Baroque music is made up of dance structure, even if it’s choral. Arlene had a Baroque dancer come in and dance the various movements of the Mass so we could see the rhythms and tempi in actuality. ... You can’t do those steps any faster or slower than they go. If you do them at the wrong speed, you’ll trip right over your high-heeled shoes.”

And Cristin Williams shared a side of Sagan’s musical relationships with seemingly nonmusical endeavors: As a teenager during the Second World War, “she enrolled in a neighborhood enemy aircraft-spotting group. ... They needed to learn Morse code. Arlene looked at the random dots and dashes on the page and decided to study them as music, learning the rhythms and patterns they made. The others in the group (all male) laughed at her ... and then were surprised when she rapidly outpaced them all.”

Arlene Rima Sagan was born June 25, 1928, in New York City. She attended Antioch College, where she met her future husband, Eugene. They were married in 1948. Graduating with honors from UC Berkeley, she received an M.A. in education and musicology from California State University, Hayward. Preceded in death by her son Alan, Sagan is survived by her sons Bruce and David; her daughters-in-law Sharon, Sally, and Lesli; two granddaughters; and her sisters Iris Rosenstrauch and Stephanie Butler.

Besides BCCO and Bella Musica, Sagan was musical director or conductor for the 12-voice Point Richmond Singers, the Berkeley Community Chamber Singers, the East Bay Chapter of the American Recorder Society, the Pacific Boys Choir, Revels Bell Choir, the El Haefronaim Choral Group, the Jewish Women’s Choir, and the Sine Nomine Singers and was a founding member and accompanying pianist for the Bach Cantata Society. She also founded and hosted Odyssey to Music (a program of medieval and Renaissance music) on Chicago’s Radio WSMT, was director of Children’s Programs for KPFA-FM (and the first female announcer/on-air engineer for the station), coordinator of the introductory program at Cazadero Music Camp, and staff member of the UC Berkeley Young Musicians Program. Sagan also taught piano privately.

She was honored as Citizen of the Year in 2006 by the Berkeley Community Fund, and in 2011 the City of Berkeley declared her a “Local Legend ... a cultural icon ... one of those wonderful people who embody the aspirations and ideals of Berkeley.”