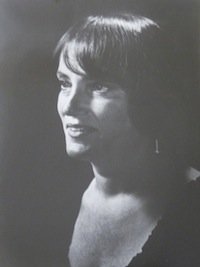 Soprano Judith Nelson, one of the world’s most famous singers of Baroque music as the early music revival began, died peacefully May 28, at the close of a 12-year battle with Alzheimer’s disease.

Born in 1939 in Evanston, Illinois, Judy (as her friends called her) attended St. Olaf College in Minnesota, where she became a leading singer in its noted choir. When she moved with her husband to Berkeley in 1962, she sang with the UC Berkeley Collegium and the Berkeley Chamber Singers. In 1972, with a UC Berkeley Hertz Fellowship, she began her career as a soloist, traveling in England and continental Europe. She joined the Five Centuries Ensemble, and met Geneviève Thibault de Chambure, who became her Parisian “angel.” She was a founding member of Concerto Vocale, with René Jacobs, William Christie, and Wieland Kuijken, and a soprano soloist with Christopher Hogwood’s Academy of Ancient Music. She made her operatic debut in Brussels in 1979, singing Drusilla in Monteverdi’s L’incoronazione de Poppea with Alan Curtis, a performance repeated at the historic La Fenice in Venice.

In the San Francisco Bay Area, she was one of the founders of the Philharmonia Baroque Orchestra. She sang and recorded often with the orchestra, and its first office was located in her home. She sang on Philharmonia’s debut recording, of Handel’s Apollo and Daphne, as well as in other works by Handel and by her other great love, Purcell. On stage, she sang several operas, including Handel’s Teseo at the Boston Early Music Festival and Sant’Alessio at the Nakamichi Festival in Los Angeles.

Philharmonia’s Music Director Nicholas McGegan remarks of her: “In the Academy of Ancient Music, Judy was a frequent guest soloist, often being paired with her good friend Emma Kirkby. Hearing those two together is one of my fondest memories; they really made you believe that angels could descend from heaven. But though Judy sang like a goddess, she was no diva. She was smart, funny, a wonderfully supportive colleague, and a joy to be with. Whenever she appeared on stage, she also radiated warmth and joy in the music making. It was such an honor to have been able to perform with her and to watch the audience be enthralled by her artistry.”

Judy performed and recorded extensively in Chicago and throughout North America, Mexico, Europe, and Asia, working with major orchestras and performance groups, both local and national, including the Bay Area’s American Bach Soloists and Magnificat, Toronto’s Tafelmusik, and Massachusetts’ Aston Magna Festival.

With harpsichordist Laurette Goldberg and actress Rella Lossy, she formed the Elizabethan Trio. I was invited to join the group, renamed Tapestry. We toured every year with shows combining Renaissance and Baroque music with literature from various countries. She was a splendid colleague and friend. Jonathan Dimmock speaks for me and many other musicians in the following comment: “Her name was synonymous with beauty, with early music style, with youthful fun. Everything about her exemplified grace. Singing was always easy. She enjoyed working with people. She loved to record. She was never in competition with other musicians.”

Judy has some 70 recordings to her credit, including LPs, cassette tapes, and CDs, many with Harmonia Mundi and L’Oiseau-Lyre. Of particular note is her role as first soprano on the Christopher Hogwood Messiah, recorded in Westminster Abbey in 1980 for BBC TV and now released on DVD (the Kultur label). The classical performance magazine Music (January 2012) ranks that recording number 25 in a list of “The 50 Greatest Recordings of All Time.” In September 1989, in recognition of her contributions to music, St. Olaf College conferred upon Judith Nelson the honorary degree of Doctor of Fine Arts.

Judy is survived by her husband, Alan H. Nelson, son Christopher, and daughter Jennifer. She was preceded in death by her father, Virgil Manes, and her mother, Genevieve Ingels Manes. A memorial event will be announced later. Donations in her memory may be made to Alzheimer’s Service of the East Bay in Berkeley, Philharmonia Baroque Orchestra, or your local hospice services.