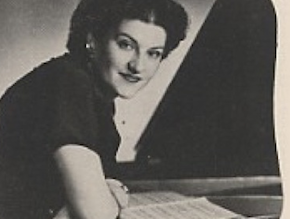 Reah Sadowsky, a pianist once hailed as a San Francisco Wunderkind alongside Isaac Stern, Ruggiero Ricci, and Yehudi Menuhin, who then carved out a uniquely distributed career, died in her Berkeley home Wednesday, two weeks short of turning 97.

Most of her performing career took place in extended residencies as she moved with her husband, a professor of Spanish. This included residency in Cambridge, Mass.; University of California at Riverside; Guadalajara, Mexico, where she taught seminars and performed with the symphony; two years in Chile; Uruguay; then in Ann Arbor, Michigan for six years; St. Charles, Missouri; Artesia, New Mexico; and finally 10 years in Colorado Springs (at Colorado College where she became an associate professor, earning her masters degree at the University of Colorado). During that period she toured on the U.S. State Department Cultural Exchange Program.

She was proud of having managed her career herself in these different communities, sending out her own concert announcements, working through music teachers associations, contemporary music groups, and music societies of all kinds.

Her playing, with a firm touch, deep tone, always had exceptional clarity, delineating the line of the piece or the movement. Early in her career, during the 1940s, Sadowsky performances were marked for their rhythmic energy and drive, integrity of form and shape, and in particular, sensitivity to style. In her later years, the last 20 or more, a more generous, broader approach became apparent, greater delicacy, more reflective and thoughtful, but as deep and musically expressive as ever before

In the 1940s, living in New York City before her marriage, she gave recitals in Town Hall and Carnegie Hall, was a soloist with the Boston Symphony and Denver Symphony, in England where she made her debut at Wigmore Hall, and in Austria. In New York, where she was very active teaching, she was known for performing new music. She introduced Prokofiev’s Third Sonata at her debut recital, and performed works, then new, by Dallapiccola, Stravinsky, Schoenberg, Hindemith, Shostakovich, George Rochberg, Lukas Foss, and later, works by Latin American composers whom she met through the envoys to the United Nations, Juan Orrego-Salas, Alberto Ginastera. In 1949, she played in Cuba and Puerto Rico.

After Sadowsky and her husband moved to Berkeley in 1980, following his retirement, she focused her teaching activity on selected pianists who came to her for guidance. She gave performances in occasional recitals and periodically, on the bimonthly recitals of the Berkeley Piano Club of which she was a member for 31 years, and its president in 1990-1991.

Sadowsky was born in Winnipeg, Canada, to Russian immigrant parents who moved the family to San Francisco soon after she was born. Her mother was a trained pianist, her father, a violinist, and their daughter, immersed in music, gave her first performance at the Public Library at the age of six, two years later playing the first movement of Mozart’s Coronation Concerto, with the California Symphony. She studied with a succession of distinguished teachers, Lev Schorr, Elsie Cook, and Adolph Riss under whose guidance she won second prize in a major city-wide competition, and at 14 gave a debut recital at the Scottish Rite Auditorium in 1929 and was accepted in the Curtis Institute. There she studied with the great Isabelle Vengerova, (teacher of Samuel Barber, Leonard Bernstein, Lukas Foss, Anthony di Bonaventura, Gary Graffman, Abbey Simon, Gilbert Kalish, Jacob Lateiner, Leonard Pennario, and Nicholas Slonimsky, her nephew).

Next, her mother moved to New York so that Sadowsky could study with Alberto Jonás, a great virtuoso and leading pedagogue of the time for two years. At not quite 16, she began studying with the great Rosina and Josef Lhevinne, first in a Salzburg summer program, then at the Juilliard School on scholarship for three years, and during one summer in Los Angeles, she worked with the great Milan Blanchet, pupil of a student of Liszt. Then came her trip to London, where she won a contract for six programs over the BBC and gave her Wigmore Hall recital.

Sadowsky’s husband, Rand Morton, died in 1998. She is survived by her son, Fred Morton, of Houston, Texas. A memorial to celebrate her life will be held at the Berkeley Piano Club at a date to be announced later.