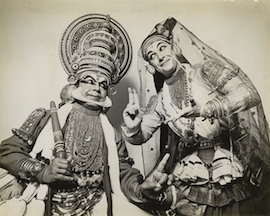 On June 14 and 15, the second weekend of the 36th San Francisco Ethnic Dance Festival, all eight styles of Indian classical dance styles will be performed on the same stage at the Yerba Buena Center for the Arts Theater, including some that are rarely performed in the Bay Area.

The Festival has often featured the four popular classical Indian forms — bharatanatyam, kathak, kuchipudi, and odissi, but these concerts add kathakali, manipuri, mohiniyattam, and sattriya. This is the first time sattriya dance will be seen at the festival, and kathakali was featured only at that 1978 event.

Kathakali is the most stylized Indian dance style, often compared to the kabuki tradition of Japan, especially in regards to the elaborate make-up worn by the performers. Its performance at the Festival will mark the last U.S. appearance of K.P. Kunhiraman. Festival Director Julie Mushet says “Kathakali dance is at risk of being lost forever and K.P. Kunhiraman is one of the few people alive who are sustaining this transcendent cultural tradition.” [The reference may apply more to the U.S. because the dance is still practiced and performed in Kerala.]