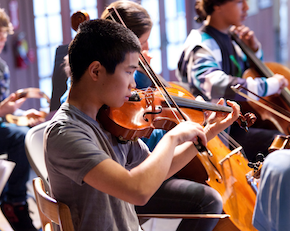 In our continuing series of interviews, in which we ask professional musicians their advice about musical education for small children, we talked to Monica Scott, perhaps best known as part of the duo martha & monica, being active with sfSound, and previously as a member of the Del Sol String Quartet. She graduated from Oberlin, received her soloist’s diploma at the Sweelinck Conservatorium in Amsterdam, and has played at numerous festivals in North America and throughout Europe. Of note, she has won two ASCAP Awards for Adventurous Programming and occasionally performs with her mother, pianist Irene Schreier.

She teaches classes at the Crowden School in Berkeley as well as at the San Francisco Conservatory of Music. She has two children, a girl and boy, ages 11 and 8. As you would expect she’s a strong advocate for the benefits of studying from a young age in a chamber group setting.

There is no ‘wrong’ approach, and in either setting [orchestra or chamber group] kids are building skills that can take them in so many directions, but I think playing in a chamber group offers an especially profound experience. First of all, you are not part of a section, you’re playing your own part and so that promotes tremendous self-esteem, building confidence but also by demanding that you really take responsibility for your playing. You can’t hide in a chamber group, as you can in an orchestra.

And so you learn the nature of teamwork, you learn how to communicate, as a group, to an audience, you learn how to communicate both musically and verbally, how to listen and to accommodate others, to negotiate ideas. This is the one time, in music only, that two wrongs make a right: If one member of the group speeds up, and to accommodate that person, all the others speed up too, then they’ve made a musical gesture. And a very profound gesture, if you think about it.

Orchestra is really like a team sport, as opposed to chamber which is perhaps more like tennis or swimming. Certainly, both have wonderful aspects. My own son is 11 and plays the cello. He was able to join a young persons chamber orchestra at 7 — there were about 16 members — and then in then when he reached fourth grade he went on to the main orchestra, which is comprised of 50 kids. He also wanted to do chamber music and this youth orchestra has a chamber extension. So it all worked out well for him.

“There’s one other aspect here. You’re playing in an unconducted group; that’s one of the beauties of chamber groups. Members of the group get coached, but ultimately they’re responsible for playing together, and so there’s the need to synchronize, to be mindful of breathing and cueing. Playing in a chamber group encourages a huge array of musical skills, and human skills, which are all integral to becoming a confident person who can communicate, stand up for themselves, and understand that the combined energy, and effect, of the group is greater than that of any one individual.”

Resources:
For parents considering musical education for their children, including chamber music groups, Monica Scott suggests looking at these websites as a way to familiarize yourself with the chamber group medium, and to find private instructors as well as both orchestras and chamber groups for kids.

Offering a complete education:
(These offer instruction to all, catering to all levels, as well as students focused on a particular path at a young age.)