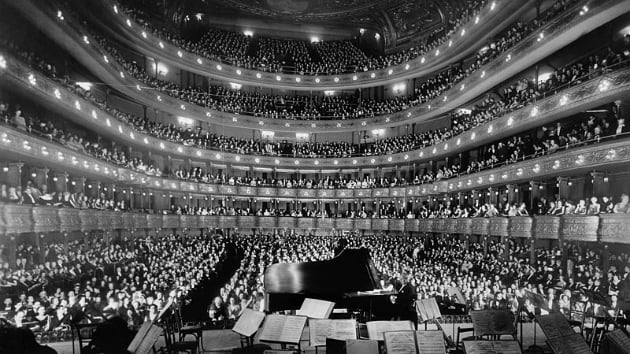 Editor's Note: Gordon Getty is a founder and board member of SFCV.

Why do we have to fork up the price of an opera ticket to see venerable principals and choristers acting out calls of nature on stage, or goose-stepping with swastikas, or reading the Wall Street Journal as they plot misdeeds?  Why must we go there to see the heads of Marx or Mao or Stalin on Mount Rushmore? Is it that an opera audience is the only one old enough to place those worthies? Didn’t signals like these leave most other venues half a century ago?

Anyone can say his piece from any podium he can find. We who don’t think much of that piece will defend to the death his right to say it. But we may well ask why the opera stage is now exceptional in welcoming such commentary.

Is it exceptional? Nudity and “doing it” and cusswords became okay in Hollywood and Broadway shows, and opera too, in the ‘60s. They have been more familiar in Europe. Operas, which already had libretti, went light on the cusswords. Liberalism grades into leftism when the theme becomes épater la bourgeoisie. That was our brand. The Soviet or Chinese brand, already in power, took a dim view of it. Lenin had called it “an infantile disorder.” Even if it were true that good manners are hypocrisy, which Lenin denied, how could bad ones advance social justice?

The heydays of the two brands coincided with the height of the Cold War. By the time Communism fell, the free speech movement had subsided and people were as fully clothed as before Hair. Nudity and sex on screen were mostly associated with art films or message movies.  Their absence is notable in recent action thrillers such as the Bond or Bourne series. Heroes and heavies returned to the bounds of the Bogart thrillers from the ‘40s. The winds of change had blown us back to where we started.

Then why is the “infantile disorder” still welcome at the opera house? Prestige and subsidy. Opera is the most iconic and subsidized of the performing arts. The left was marginalized, never erased, and iconic venues are the place for counterculture demonstrations. Meanwhile, subsidy can crowd out market forces that might override these points of view. The supply of staging concepts comes from producers and intendants. Demand to pay for them comes only partly from the audience that will see and hear them. Half to three-fourths of the cost of opera, as a rule of thumb, comes from donors and government. The audiences can reveal preferences by attending or not. But the show goes on as long as the subsidies do.

Then why does the subsidy go on?

Some is called for. The same audience goes to movies and Broadway, and reveals its preferences there. But it expects something different in the opera house. Opera is art. Art needs patience. Beethoven and Wagner and Mahler sounded all wrong at first. Now even the mass movie audience laps them up. Some subsidy is the price of patience, and patience is the price of art.

We are patient because we don’t want to gag the messenger. But why so long? Diehard leftist zeal in some suppliers, bless them or curse their carbuncles, and some on the demand side too, plus the patience duly shown for grating messages in the arts, adds up to something. Does it add up to 50 years and counting?

I think we are also seeing a founder effect. There is such a thing as cultural inertia, or Richard Dawkins’ self-perpetuating “memes.” A vivid example might have come with the fall of the Third Reich. As part of de-Nazification efforts, the American occupiers force-fed West Germany with modernism in all the arts. Go figure. That seems to have encouraged épater themes in new opera and in productions of old opera. Germans had seen no such things since Hitler came to power. What was imposed by American mandate seems to have become habit. Few are old enough to remember the fall of the Reich. Much fewer remember opera from before. What people have always known may come to seem nature’s way.

Government would have been scoffed from office after such a mandate here. Here, the self-perpetuating meme would have just grown like Topsy, with the help of the European example.

The banners from the ‘60s still fly at the opera flagpole because of honest leftist zeal from some on both the supply and demand sides; honest patience with the messenger; and an honest perception from lifelong experience that flying those banners there is part of nature’s way. There are no villains in the story, nor are there dimwits. Yet. I do suggest that another half-century would raise questions about the second.

I have used or misused economic terms because economics is the elephant in the room. Economics is biology. Selection pressures and market forces are the same. Memes and banners from another age will not outlast the subsidies that pay for them. What if donors and governments found other priorities? Would that mean no more opera?

Broadway makes a go of it, in houses half the size of the Met, with even higher production values. Could the Met switch to straight runs with rotating casts? Unthinkable so long as subsidies prolong the old memes or mindsets. Never mind that Baz Luhrman did it with La Boheme, in 2002, and Gian-Carlo Menotti long ago with new opera. Take the subsidies away, and more becomes thinkable.

The Met’s current repertory system, rotating operas with casts intact, might cope through drops and projections in place of hard-to-move architectural sets. Simulcasts might go to homes and restaurants, like sportscasts, and find sponsor or pay-per-view support.

This list barely starts the conversation. The free market, now crowded out by subsidy, is thousands of potential Edisons with ideas not yet imagined. Even new and rare opera can float, if barely, in the recording market. Gosh knows what entrepreneurship might do with even a glimmer of demand.

This makes a case for stopping all subsidy. That’s too bold for me. The need for patience is real. We see our children through to maturity. Freedom to subsidize in that, or any case, is a part of market freedom rather than a crowding out. A good libertarian would okay both.

He would nix sticking government with the bill. Government supports opera and the arts directly in Europe. Its support in America is mostly through income tax deductibility for donations. He would nix both. Then what would happen to private support?

An end to deductibility would tend to bring downward pressure for textbook reasons. As the after-tax price of giving goes up, demand goes down. But what if the utility in prestige and self-respect go up to match? Being on the donor list counts for more when every dollar comes from you. There’s a little of Diamond Jim Brady in all of us. If we happen to believe in opera, or think others do, we might be motivated to light that cigar with the biggest bill we can find. This was a theme of Thorstern Veblen a century ago, not particularly about opera, and of Robert Frank today.

My vote on this topic, not all, is with the libertarian. Enough already. The maxim that opera must not become a museum has made it one. Mess is not a message. Fifty years of patience with it are about 50 too many. The crutch has slowed us down. Donors still answer the call. Razumovsky and Waldstein, Beethoven’s patrons, got no deductions. (Meanwhile, I take them, too.) My advice on subsidies is earnest. Have no fear. It will die for want of a second.

My apologies to whomever I haven’t offended. We didn’t get to the libertarian. My advice on subsidies is earnest. Have no fear. It will die for want of a second. There is hope, meanwhile, that intendants and donors and board and even audience members can rethink old assumptions. We are not dimwits yet. Opera has become the museum of the infantile disorder. We can’t all have meant that. We can’t all really want to see middle-aged folk keep their bathroom and bedroom doors open, or need it for our own good. We are seeing a founder effect. The meme is in charge. Pull the plug.

Power to the board! The means do not justify the ends! Freedom here, freedom now for the audience to throw out the garbage as well as walk away from it! You can’t make an omelet without breaking sophomoric eggs! Phooey on the idea that the intendant or director knows the omelet from the garbage better than we do!

Sophomores and zealots need love too. The intendant knows some things better and deserves things better, and deserves respect. But the duty of patience is the duty to ration it. More for A means less for B. The same goes for Shakespeare companies, and wherever the product is iconic and subsides high. Those are the soft targets. We could defend them better. It is not too late to notice that the flags they fly have gathered dust in attics for half a century whenever people had the chance to put them there. We are not dimwits yet.

Opinion pieces reflect solely the point of view of the author and not SFCV editors or staff.