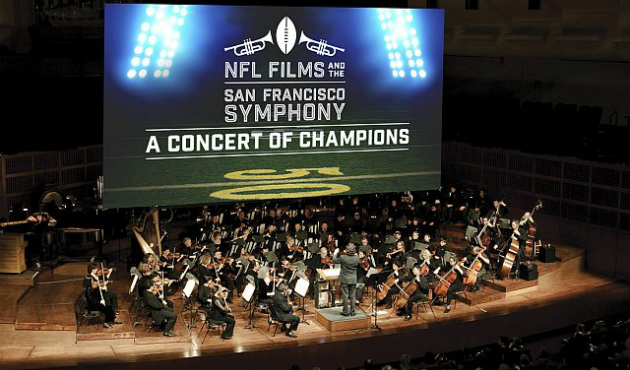 S.F. Symphony with an Audible Near the Line of Scrimmage

From Levi's Stadium, the Santa Clara home of the Forty-Niners (formerly of San Francisco), to "Super Bowl City" at the Ferry Building (creating traffic bedlam), Super Bowl 50 is as omnipresent just now as snow is on the East Coast, and Davies Symphony Hall is no exception.

"A Concert of Champions" is created by a temporary alliance between the San Francisco Symphony and the National Football League and will be seen and heard in Davies on Feb. 3 and 4, ahead of the game, which begins at 3:30 p.m. PST on Feb. 7. As all seats for the game, including those listed at $10,000, are long gone, CBS TV is your ticket. Availability is much better for the concerts, and prices run from $50 to $195, although "elevated events," including formal dinner packages cost between $1,000 and $5,000, all for the benefit of S.F. Symphony community and education programs.

At the concert, Joshua Gersen will conduct the orchestra, the program featuring NFL Films clips, with guest host Marcus Allen, NFL Hall of Fame running back. (Allen, as this music column with a broad swath of interest is expected to note, ran for 12,243 yards and caught 587 passes for 5,412 yards during his career for both the Los Angeles Raiders and the Kansas City Chiefs from 1982 to 1997, scoring 145 touchdowns, including a then-league record 123 rushing touchdowns.)

Here's a sampling of the music to be played (with a raised eyebrow here about "Les Toreadors" from Bizet's Carmen Suite No. 1 — football and bullfights, really?): Gould, American Salute; Selections from Goldsmith, Rudy Suite; Copland, Fanfare for the Common Man; Robidoux, The Champions Suite; and Lombardi's Trophy Super Bowl Suite.

Among the music accompanying film excerpts: Spence, Sabers and Six Guns; Hedden, 75 Seasons; and Spence/Hedden/Robidoux, Follies Suite, including "Dance of the Fumblers," "The Commissioner," and "Follie My Lead." ("Fumblers" and "Commissioner" are in sequence, not together.)

The man responsible for putting the program together, Richard Lonsdorf, S.F. Symphony associate director of artistic planning, takes pride in his work:

The connection between sports and the arts is not nearly as large a leap as some might think. NFL Films is famous for its groundbreaking filming techniques and bringing the game to fans in a way that they had never been able to experience it before (by using, for instance, ground-level slow motion and reverse angle replays).

What’s more, their films feature original musical scores, which is a strong testament to music’s power to help tell a story. S.F. Symphony’s partnership with NFL Films is going to bring that storytelling power front and center, as the orchestra performs the musical scores live with NFL Films’ timeless footage. 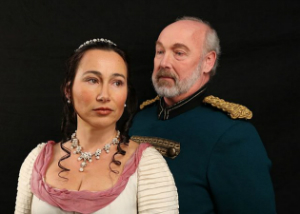 Moscovich conducts, and the stage director is Ragnar Conde, who hails from Mexico, where he has an important career going. Conde is due to make his debut this season at the Teatro de Bellas Artes and the National Auditorium in Mexico City. Conde's concept is to present Onegin later in life, as a man who has never been able to hold down a relationship. The whole story is told in Onegin's flashback, probably in his 50s, about his uncle's estate, finding Tatiana's family home nearby, and reliving in his mind youthful moments of bliss and loss. "We see vignettes of a story, highlights, like in a dream. That's what Tchaikovsky called them," Conde says. "And his score is so seamlessly constructed, so dramatically tight, that it lends itself to this idea that we are immersed in a sort of dream, at least a trip down memory lane, situations flowing in and out, the meter and tempo changes always so perfectly organic to the passions in the story as to make everything sound inevitable."

Moscovich says it's the company's first Onegin in Russian, it will be presented set in the original time period, and "using flashbacks, aided by video projections, to further enhance storytelling. We are also test-driving a new orchestra reduction by Bryan Higgins."

Heavens to Murgatroyd!, Ruddygore is Coming 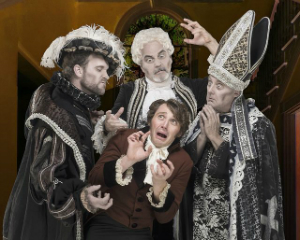 The synopsis of the Gilbert & Sullivan Ruddygore alone is worth the price of admission:

When inflicted with a family curse, Sir Ruthven Murgatroyd fakes his death and disguises himself as simple farmer Robin Oakapple, leaving his brother Sir Despard to carry the curse of being forced to commit one deadly crime a day or perish in indescribable agony.

Before long, Robin falls in love with virtuous maiden Rose Maybud, but he finds himself in a love-triangle with his foster brother, Dick Dauntless. Add to the mix Mad Margaret who has been driven to insanity by the curse on her beloved Despard, a bevy of professional bridesmaids, and a ghostly chorus of ancestors...

Yes! Hence "Heavens to Murgatroyd!," which you might have heard from Snagglepuss on the Yogi Bear Show, sounding like the Cowardly Lion, originated in the G&S musical of 1887. Along come Rose Maybud, Dick Dauntless, and others.

Lamplighters Music Theatre will present Ruddygore, Feb. 12-28, in three locations (see below). They describe the musical as "a comic masterpiece that melds the world of Jane Austen with a good old-fashioned English ghost story and a dash of Wuthering Heights romance." Lamplighters further explains that Gilbert derived the story from his own one-act operetta, Ages Ago, and based the character of Mad Margaret on Madge Wildfire from The Heart of Midlothian by Sir Walter Scott.

Among memorable musical numbers: "From the briny sea," "Cheerily carols the lark," "Hail the bride of seventeen summers," and "Oh, happy the lily." 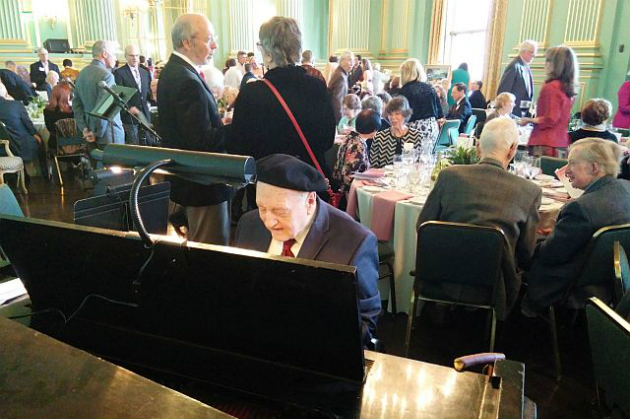 With tables almost touching each other and waiters squeezing through virtually nonexistent spaces, it was a full house in the Green Room of the Veterans Memorial Building on Sunday, as ovation after ovation greeted Mr. Pocket Opera — founder and artistic director Donald Pippin — on his 90th birthday and the occasion of his 90th English translation of operas.

Pippin sat through the reading of greetings — including from the mayor of the city and the general director of San Francisco Opera — looking as shy and humble as ever, eagerly awaiting the opportunity to do what he does best: play the piano. Longtime collaborators and former students spoke enthusiastically of "what Donald means to me," and the audience joined in with famous opera choruses with text modified for the occasion, so Carmen's "Toreador Song" sounded like this:

Play Donald Pippin, show’s about to start!
Play maestro! On with the show!
Mozart, Flotow, and Donizetti,
Offenbach and Bizet,
Puccini, Verdi too—
add one more name.
Pippin! Sing of his fame!

To connect the future with the past, the day after the event, Pocket Opera announced single tickets going on sale for the 2016 season's six productions, each opera presented in Pippin's "lyrical, concise English – carefully arranged to create the greatest possible fidelity to the composer’s original intent," according to Executive Director Dianna Shuster. The season:

• The annual Handel concert – the only Pocket Opera production performed in its original language – will be Giulio Cesare, on Apr 24 and May 1, with Rabihah Dunn as Cleopatra.

• Pocket's popular double-bill of Leoncavallo’s I Pagliacci and von Suppe's My Fair Galatea is scheduled for May 15 and 22.

• A great Verdi warhorse, Rigoletto, will get three performances, on June 5, 12, and 26, with Igor Viera in the title role.

• Michael Mendelsohn stars in Offenbach's La Vie Parisienne, which closes the season on July 10, 17, and 24.

All Pocket Opera performances take place in the Legion of Honor in San Francisco and the Hillside Club in Berkeley. 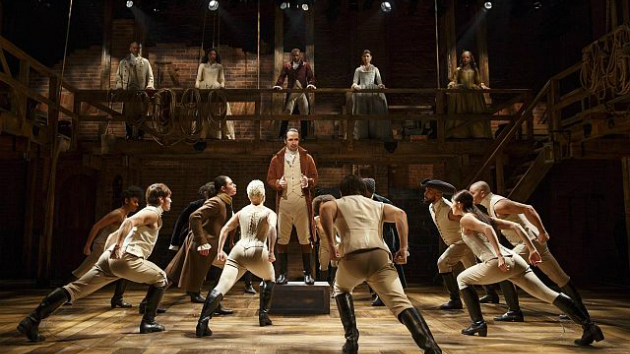 Lin-Manuel Miranda's Hamilton, Broadway's biggest hit, will open a national tour in San Francisco in the SHN Orpheum Theatre in March 2017, the presenting organization announced today. Hamilton is based on Ron Chernow’s biography of Alexander Hamilton, an immigrant from the West Indies who became George Washington's right-hand man during the Revolutionary War and was the new nation’s first Treasury Secretary.

Featuring a score that blends hip-hop, jazz, blues, rap, R&B, and Broadway, Hamilton is "the story of America then, as told by America now."

The musical will anchor the SHN 2016-2017 season, and joins the previously announced The Curious Incident of the Dog in the Night-Time, an adaptation by Tony and Olivier Award winner Simon Stephens of Mark Haddon’s best-selling novel. Four additional Broadway productions will be announced next month to complete the season.

With book, music and lyrics by Miranda, direction by Thomas Kail, choreography by Andy Blankenbuehler, musical direction and orchestration by Alex Lacamoire, Hamilton's creative team previously collaborated on the 2008 Tony Award-winning Best Musical In the Heights.

Information, season ticket renewals and new subscriptions will be available from SHN soon.