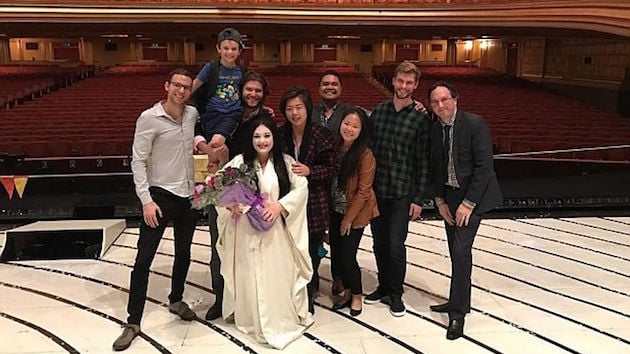 Soprano Toni Marie Palmertree, who already made a big impression in last year’s Merola Program, is an Adler Fellow now, and her assignments include being the cover for the title role of Madame Butterfly. On Friday evening she heard the words every understudy covets and dreads: “It’s your turn, break a leg [theater talk for the taboo ‘good luck’].” 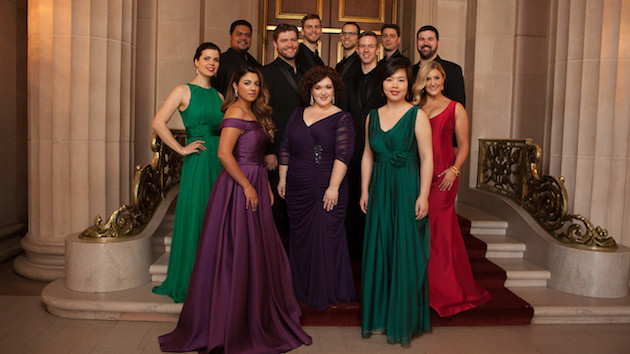 General Director Matthew Shilvock, responsible for casting and for deciding on the replacement, informed the audience that “the role of Cio-Cio-San will be sung tonight by Toni Marie Palmertree, replacing Lianna Haroutounian, who is ill.” (Apparently, the Armenian soprano came to the War Memorial wanting to sing, but flu-like symptoms created vocal difficulties she couldn’t overcome — she is expected to resume the role for the rest of the run through Dec. 4.) 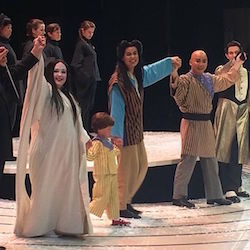 Soon after the curtain opened on the June Kaneko-designed production, Palmertree entered the stage and — after adjusting to conductor Yves Abel’s super-romantic and unusually slow tempi — her voice started soaring. As the three-hour-long performance went on, something remarkable happened. The young soprano not only met the challenge, but she claimed her place among the finest vocal interpreters of the role heard here recently. It was, to borrow from Hamlet, “a hit, a very palpable hit.”

Hers is a big, bright, beautiful voice. She sings with an innate, unaffected musicality, with enough projection to fill the 3,200–seat auditorium smoothly and completely. It’s an individual, personal voice, one which you can recognize when you hear it again, not the kind of “generic soprano” that is present in profusion.

Palmertree received well-deserved ovations, heartfelt acclaim from current and former Adler Fellows in the cast (Zanda Švede, Edward Nelson, Julie Adams, Matthew Stump among them), and the next morning this unstinting message was waiting for her on Facebook, from “the boss”:

The stunning impact of Toni Marie Palmertree’s first Butterfly will be etched in my mind for all time. She gave so completely of herself and took the audience on an incredible journey. You made us all so proud last night, Toni Marie. — Matthew Shilvock 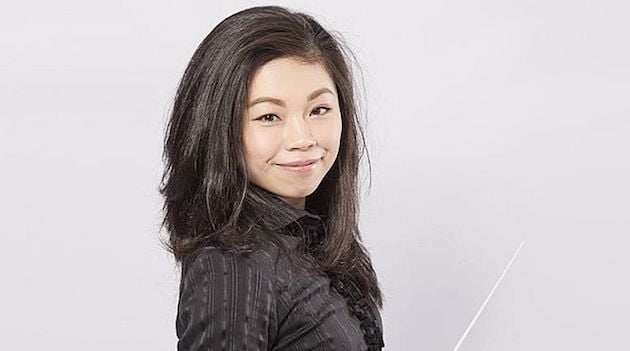 The poster for Berkeley Symphony’s next concert, on Dec. 8, has music director Joana Carneiro’s photo, but she will not conduct as previously announced. More on the Carneiro absence later, first about the concert: The guest conductor is Elim Chan and the program will remain the previously scheduled Beethoven Piano Concerto No. 4, with Shai Wosner as soloist, and the West Coast premiere of James MacMillan’s Symphony No. 4, a co-commission with the BBC Scottish Symphony Orchestra and the Pittsburgh Symphony. 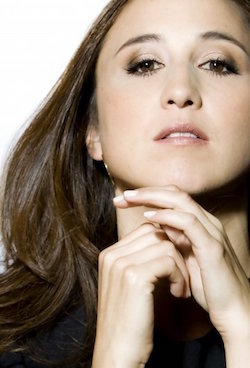 Hong Kong-born Chan became the first female winner of the Donatella Flick Conducting Competition in December 2014, as a result of which she held the position of Assistant Conductor of the London Symphony Orchestra for the 2015–16 season. She has been appointed to the Dudamel Fellowship program with the Los Angeles Philharmonic for the 2016–17 season, and in the following season, she will become chief conductor of NorrlandsOperan.

Israeli-born Wosner studied at the Juilliard School with Emanuel Ax. He is now on the faculty at the Longy School of Music in Boston, and is launching an international solo recital series of Schubert sonatas.

Carneiro’s absence is not explained. The press release states only that “she is withdrawing from the concert,” and there has been no response to inquiries. Carneiro also withdrew from the October concert in Berkeley “for personal reasons,” with Edwin Outwater substituting for her. Elsewhere, she has not appeared for at least the past three months. Scheduled to lead Stravinsky’s Oedipus rex in Lisbon last week, Carneiro — who is principal conductor of the Orquestra Sinfónica Portuguesa there — had Leo Hussain substitute for her on the podium. 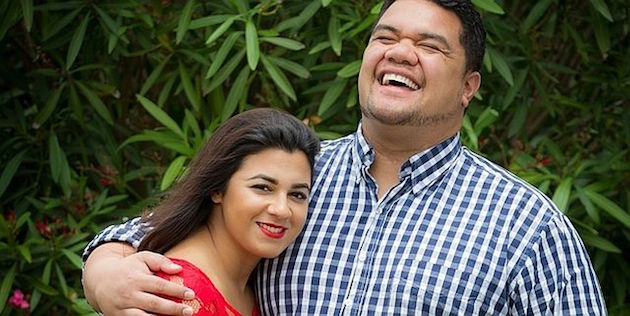 I Saw Next Summer’s Duke of Mantua ... and So Can You

It’s always thrilling to hear Pati, a powerful and sensitive lyric tenor with heroic high notes, but this event also allowed for a preview of his scheduled appearance in May and June, when he will sing the Duke of Mantua in Rigoletto. He and Edris told stories about their careers and relationship and performed a program of arias and songs by Verdi, Mozart, Tchaikovsky, Fauré, Caccini, Meyerbeer, and others.

Thanks to the S.F. Performances’ streaming of the event on Facebook, there is a video still available of the program’s first hour. 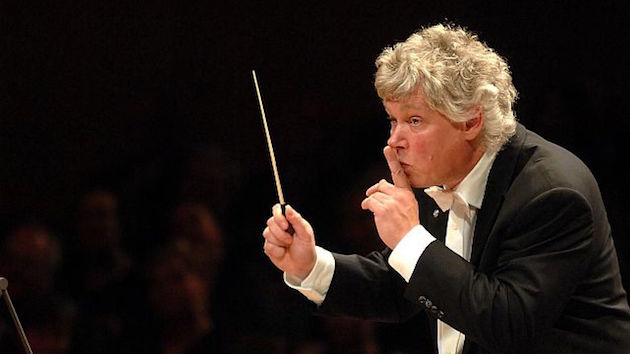 An excellent streaming video — mostly in Hungarian and French, but perfectly understandable from the images and sounds — provides a welcome portrait of the late Zoltán Kocsis — pianist, conductor, educator, and music director. Another video follows Kocsis — co-founder of the Budapest Festival Orchestra — in his capacity as a lifelong teacher at the Franz Liszt Academy of Music. 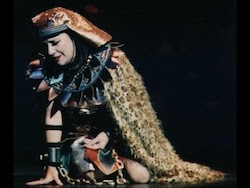 LVO President Jim Schmidt said Mills “brings a robust set of valuable experiences from personal opera performing, coaching singers, and maintaining strong contacts with professional singers and stage directors.” Mills has been involved with LVO since 2009, and says she has seen “the quality improve with each production,” adding that “while LVO relies on our many wonderful volunteers, we are a professional opera company.” 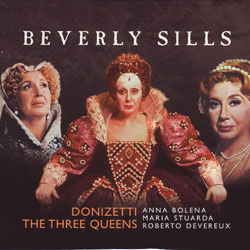 In the 2004 book Trump: How to Get Rich (with Meredith McIver), Donald Trump points to pianist Glenn Gould’s success as an example of accomplishment based on hard work and long hours. As quoted from the book in a WQXR feature by Caroline Cooper, Trump wrote:

In 1955, Glenn Gould, the classical pianist from Toronto, rocketed to international fame by recording Bach’s Goldberg Variations. He may have seemed like an overnight sensation to the general public, but anyone who’s been working at something for twenty years isn’t likely to agree with that assessment.

Trump says he has “limited knowledge” of classical music, and is not certain what makes a great musician, “but I would guess that passion plays a large part.” He was familiar with the late soprano and Brooklyn native Beverly Sills, and says one of his favorite quotes from her is “There are no shortcuts to anywhere worth going.”

A “New Stravinsky” from St. Petersburg

A blog item from Alex Ross calls attention to the Dec. 2 live streaming on Medici.tv and on Mezzo.tv of Igor Stravinsky’s hitherto lost 1909 work, Funeral Song, whose orchestral parts were recently rediscovered in St. Petersburg. The modern-day premiere will be in the city’s Mariinsky Theater, with Valery Gergiev conducting the Mariinsky Orchestra.