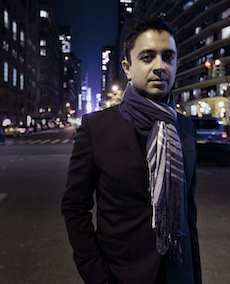 Viyay Iyer, 42, is in his third year as Jazz Artist-in-Residence for San Francisco Performances, and has accomplished great things in performing, arranging, composing, and much else, but his next appearance, on Nov. 16 at SFJAZZ Center, will have a sense of novelty and command attention like a rock star.

Rock, not as in music, but as in riotous fame and fortune. Iyer has just been named a 2013 MacArthur Fellow and there is talk about him wherever you look. The "genius award" cited him as:

An ardent investigator of musical communities, practices, histories, and theories, he mines core rhythmic, melodic, and structural elements from a wide range of sources to construct richly varied, improvisation-driven solo and ensemble music.

The MacArthur followed announcement of Iyer's appointment to Harvard University's faculty as the school's first Franklin D. and Florence Rosenblatt Professor of the Arts. Iyer (whose name is pronounced "VID-jay EYE-yer") received a Master's in Physics, and an interdisciplinary Ph.D. in Technology and the Arts from the University of California at Berkeley.

And, in a feature about him in the current issue of The New Yorker, Seth Colter Walls writes:

In 2009, the pianist and composer Vijay Iyer experienced what would normally be considered a "career year" in the jazz world. His album Historicity had striking original music and distinguished covers of songs by M.I.A. and Julius Hemphill. Yet to the surprise of Iyer, who had more than a decade of touring and recording under his belt, the album took off and became an end-of-year best-album pick among jazz critics. 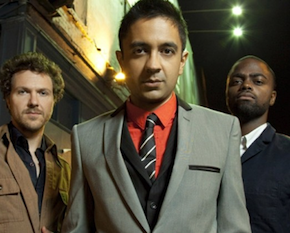 "I didn’t expect everyone to vote for me," he said over lunch this week. This year has brought him even headier votes of institutional confidence. In addition to receiving a MacArthur "genius" grant and tenure in Harvard’s music department, Iyer has been at work in a variety of artistic practices — even by his standards of variety.

Most recently, he led a large-ensemble adaptation of Teju Cole’s novel Open City (with the author’s participation), which premièred on a recent weekend, at Montclair State University, in New Jersey. And this past summer he released Holding It Down: The Veterans’ Dreams Project, conceived and performed with the poet Mike Ladd, and including a backing band packed with great names, from the cellist Okkyung Lee to the vocalist-composer Pamela Z ... The cumulative power of the piece launches it into a realm normally cleared for élite contemporary oratorio — not all that different from, say, a socially engaged Peter Sellars' staging of a John Adams or Kaija Saariaho composition.

Further, Iyer and ECM Records are announcing upcoming releases, beginning next March with Mutations For String Quartet and Piano/Electronics.