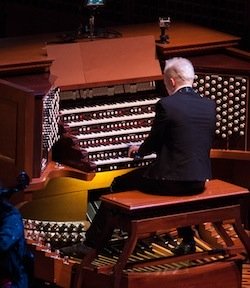 On Thursday evening, May 10th, 2012, the San Francisco Davies Symphony Hall held a performance under the name of Barbary Coast and Beyond. The performers were the San Francisco Symphony and the United States Air Force Band of the Golden West. The performance was interesting and unexpectedly exciting, and it was mostly about San Francisco’s music from the past. It turned out that every piece played that night was unique; each had its own story.

San Francisco’s music a century and more ago was inspired by the real events happening then. For example, when gold was discovered in California, famous composers began writing songs about the Gold Rush. When the earthquake of 1906 hit San Francisco, J.H. Stockman wrote a piece for the piano called The Earthquake in San Francisco.

A big part of the music that the San Franciscans heard back then was from touring musicians. There were opera singers, pianists, and violinists who came to San Francisco during the Panama-Pacific International Exposition, the international fair that brought together a lot of the world’s greatest performing groups and different types of music.

The Symphony performance was really entertaining, with Val Diamond as the narrator who explained the show with humor. There was also a big screen with projected images of what the music being played was about. Besides Val Diamond, there was also a bunch of other characters that made the show more fun to watch.

Michael Tilson Thomas conducted the orchestra with a lot of energy. Caroline McCaskey, a woman who won the 2007 Musical Saw Championship, also participated in a piece. There were plenty of other soloists, including Vadim Gluzman the violinist, Laura Claycomb the soprano, Anton Nel the pianist.

The person who seemed the most interesting, however, was Cameron Carpenter, the organ player. Cameron had stylish hair and shiny clothes, and at one point in his performance, he played the organ with his feet!

There were some spectacular pieces featured in the evening. Violinist Vadim Gluzman gave an exciting and skillful performance of Kreisler’s Tambourin Chinois. Cameron Carpenter played his own loud and awesome arranged version of Sousa’s The Stars and Stripes Forever.

Although most of the performance was fabulous, there were also a few dull pieces thrown into the pot. The three banjo players played slowly and tediously, almost like a boring lullaby. Stockman’s The Earthquake in San Francisco didn’t seem like anything special.

At the end of the show, Val Diamond and Laura Claycomb led the audience through three sing-alongs. Then the show was over. The San Francisco Symphony’s Barbary Coast and Beyond was excellent. It was a great and exciting experience.