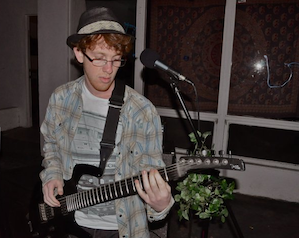 On August 24, 2001, a music review by Tony Hicks in The Contra Costa Times reported on the overnight success of the Moss brothers: Reuben, 12, and Evan, 15. The night before they’d been the opening act at the Fillmore in San Francisco for a four-day rock music festival called Nadine’s Wild Weekend.

As the reviewer exclaimed, “Opening a big club showcase at the storied Fillmore, girls screaming and peeling off their unmentionables to fire at Reuben, an endorsement from a major guitar manufacturer by the time he was 10 — do these kids from Piedmont even get how big this is?”

The short answer is, for Reuben at least, he did and he didn’t.

“The ‘Moss Brothers era’ lasted from about 1999 to 2003; I was about 9 to 13. It ended when I started high school; my brother the drummer was getting serious about college applications and our bass player moved to Italy. Nothing bitter, dramatic, or rockstar-esque about the ending, unfortunately. I went on to play in various bands throughout high school and focus on classical composition.”

In the Moss Brothers era, Reuben reminded people of Harry Potter. He wore round glasses and came across as nerdy and perhaps haughty. He went to the Crowden School (1998-2003), and by day played the violin, but with no particular passion for classical music, save the likes of Shostakovich. Still, he remembers the school fondly, particularly his violin teacher, Erika Miranda, and of course, Ann Crowden herself.

“She had an intimidating presence, and I remember one day I was in sixth grade in a string quartet. It may have been a Haydn piece and on the surface it seemed very simple. I was at a stage in my life when I figured that my biggest obligation and goal, was to get the notes right and play rhythmically and on time, and so I completely missed out on what was going under the music. But I looked around and I saw these other kids were struggling just to get the notes right. So I ripped on that and she chewed me out.”

“She’s the one that taught me to compare myself to my potential, not to other people.”

Reuben went on to Piedmont High and Stanford where he majored in music composition. When we reached him the other day, he had recently moved back to Piedmont from Los Angeles, where he’d been teaching music and briefly played in a band. “It didn’t work out,” he said. “One of the dudes bailed.”

These days he’s got a full time job with an SAT tutoring service, and is gradually trying to work his way back to writing music. He’s also been working with his mother on a soundtrack to accompany a book project.

If he could do anything, “in a perfect world”, as he puts it, he would write music for soundtracks, and do some commercial scoring. But it’s difficult. His time is mostly spent and his creative batteries have curiously run down.

In his days as a rockstar, Reuben found it easy to write lyrics. He wrote about a guy who watched so much TV his brain rotted; or about cheating on a test. He got ideas from passing ironies and things overheard. He didn’t write about women because he didn’t know them and he thought that was trite.

And what would he write about now? He’s caught in a thicket; there’s nothing from the heart to express. “I don’t want to sound trite on the one hand or pretentious on the other.”

And there’s another obstacle. He feels the need for more technical expertise. “I need more knowledge of how to record myself,” he said. “The art of recording feels like a foreign language. In the past, people were always helping me, but now it’s time to do this myself.”

“It’s a matter of taking myself seriously as an adult,” he said, not a little wistfully, at the thought of how much success he had at 12 and the notion that somehow he should have converted that into something more than he did or could.

And how might he advise kids at Crowden who are interested in going on with music and not necessarily classical music?

“I would stick with classical training. It doesn’t obligate you and if you’re interested in some other music form, like rock ‘n roll, it guarantees that what you produce will have more breadth and depth. Of course, middle school is middle school and it can be horrible; people know every detail about you and they judge you relentlessly. But finally it’s just a crazy good experience. I’m happy I did it and I never regretted it.”

Back to top
Comments
By Michael Zwiebach

May is a popular month to be born in: Lou Harrison shares his May 15 birthday with Claudio Monteverdi and May 17 is Eric Satie’s big day. Once again alphabetical order comes to the dictates preference. Lou Harrison’s name may not be as famous as the other two guys, but he was a marvelously creative guy, into everything from astronomy to Esperanto.

He had personal links to dozens of “avant-garde” (experimental) composers from Charles Ives to John Cage to Henry Cowell to John Luther Adams (a composer he taught). His music is totally approachable, though, in contrast to some other high modernists. His range of compositions was as wide as his interests, but you’ll always find great melody in a Harrison piece. Find out more about Harrison, listen to his music, find links and other goodies in SFCV’s composer biography.

Back to top
Comments
By Michael Zwiebach

May 18, 4 p.m., St. Mark’s Lutheran Church, San Francisco: The S.F. Girls Chorus Alumnae Chorus sings a program centered on the music that Johannes Brahms wrote for his hometown women’s chorus. If you’ve ever wondered about the work this famous choir does, here’s an excellent chance to find out. Brahms: Women and Beyond. 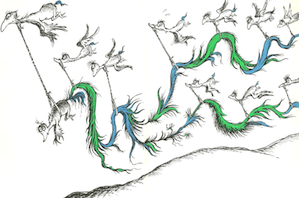 sponsors a number of kids’ events throughout the year. This is the last of the season, but it should be fun: Kids 3-7 will be able to take a dance lesson led by Sacramento Ballet’s Education and Outreach Coordinator, Vanessa Bautista. What comes next? A family concert by pianist Lara Downes, featuring Davis High School Orchestra, and Mondavi Center Young Artists winner soprano Anush Avetisyan and girl soprano Lily Linaweaver in Dr. Seuss’ Gertrude McFuzz along with selections from Saint-Saëns’ Carnival of the Animals, and more. Kids in the Courtyard.

May 19, 7 p.m., Le Petit Trianon, San Jose: San Jose Chamber Orchestra presents NextGen: a special young artists’ concert. In this concert, the SJCO bring in their training orchestra to play side-by-side with the professionals, the soloist is 18-year-old Austin Huntington, and, best of all, two of the composers featured on the program are the two winners of the inaugural Allen Strange Composition Prize. Luckily, the conducting and coordinating is still in the hands of an adult, Anthony Quartuccio. NextGen.

May 20, 8 p.m., Freight and Salvage Coffeehouse, Berkeley: Classical At the Freight: Young Artists Showcase. Speaking of young artists concerts, here’s one that is appealing because you get to hear from (and talk to) the young musicians during the concert. Run by the San Francisco Chamber Orchestra, this series is a great way to introduce yourself (or your kids) to classical music. It features stories and conversation as well as music. Young Artists Showcase.