The first week of June there were more double basses on MUNI, rolled around on sidewalks and stuffed into Prius trunks than ever before in San Francisco — the International Society of Bassists Convention convened at San Francisco State University from June 5-12. The “Summer of Bass Love” drew the bass quartet from the Gothenburg Symphony Orchestra (Sweden’s National Orchestra, conducted by Gustavo Dudamel), to the gathering where they were invited to perform their original children’s concert, Greta’s Dream.

According to a synopsis by composer-performer Charles DeRamus: “Greta's Dream is the story of a young hippopotamus named Greta who dreams she can fly. Despite the nay sayings of her fellow hippos, Greta and her best friend, a frog named Polly, believe that perhaps she can actually fly, but just needs help to learn how. The two friends embark on an adventure to seek out the famous Hippo Wizards, who can hopefully teach young Greta how to realize her dream.”

DeRamus’ original tunes are interspersed with engaging narration — Swedish TV star Ayla Kabaca did the honors — and music from Carnival of the Animals, The Nutcracker, and other well-known pieces. The work is a wonderful introduction to the double bass and classical music, and is currently programmed by more than 15 orchestras in seven countries, in three languages. Hopefully, public performances will soon be slated for the Bay Area, stay tuned!

Say Aloha to the Ukelele 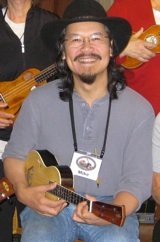 It’s happening in garages, basements and backyards across America. A trend relatively under the radar but becoming increasingly difficult to ignore — playing the ukulele! According to instrument maker, teacher and performer Mike DaSilva, it’s big, and getting bigger especially here on the coasts, the Midwest and in Canada, where the ukulele is offered as the standard school instrument. DaSilva quit his day job in High Tech seven years ago to build ukuleles at his shop in Berkeley, and he’s still going strong, also teaching classes and leading the Berkeley Ukulele Club.

He speculates on several reasons for the surging popularity of the instrument: “The barriers are so few. You can get an instrument for a minimal price ($50 - $100), it’s fairly easy to play, there’s no snobbery associated with the instrument, and when you play, your mouth is free for singing.” The Berkeley Ukulele Club gathers at DaSilva Ukulele Company twice a month, and welcomes all kids over the age of eight and parents to attend together.

No prior experience or instrument necessary, he will loan you a uke and get you a strummin’! If you’d rather get the basics beforehand, DaSilva offers group classes from beginning up through advanced. He also sells his gorgeous professional grade instruments for those that get hooked. Join them June 22 for a Potluck and Open Mic Party.

There's Music in the Air in Redwood City

Redwood City comes alive during the balmy evenings of summer, and there is a lot on offer for families, from classical music, to film to jazz and other styles. Bring your picnic dinner to the courthouse steps and hear the Redwood Symphony kick off the series with a pops concert on June 25. Opera San José, known for showcasing some of the finest young professionals in the country, will sing operatic favorites as well as preview their 2011-2012 season with works including Mozart’s Idomeneo, Leoncavallo’s Pagliacci, Poulenc’s La voix humaine, Verdi’s La traviata, and Gounod’s Faust, on July 10.

An even more extensive eight-concert series, Jazz on Main is planned for downtown, beginning on June 20 with the Anton Schwartz Quintet, and presenting Mads Tolling, founding violinist of the Turtle Island String Quartet, later in July. If the family prefers funk, jazz, and rock, the Music in the Park series at Stafford Park is for you. Dance, film, and art events are also in town for the taking. Get the lemonade ready; this is what summer is all about! Visit their Web site for further information.