The hallmark of a good musical theater tune is its catchiness or expressiveness; its tendency to get in your head and stick there. And when these shows are made into movies, they are ripe for repeating, playing over and over, and for singing along! This summer, Ohlone College in Fremont presents sing-along movies at the Smith Center Outdoor Amphitheater that will have the whole family belting out the popular tunes in Aladdin, Grease, and Chicago, under cover of the rest of the enthusiastic amateurs in the audience.

Audience participation is not a new concept in movies, just one that has taken off in the last decade. Around 1926, Max Fleischer patented the “bouncing ball” for Disney, a small, animated ball that bounces over the words on the screen, cueing both the audience and the theater organist in the silent movie era. Organists continued the practice, and in the late 1940s made “sing along” slides, projecting the song lyrics for the audience to sing-along as a sort of overture to the film. Participation in The Rocky Horror Picture Show, which still draws cult-like crowds today, began at the Waverly Theater in Greenwich Village in 1977. And a more kid-friendly sing along show, The Sound of Music, became popular around the year 2000 in the U.S., and earlier in London. San Francisco’s Castro Theater regularly offers these and other sing-along movies for all ages — come to the matinees for a bit less crazy and more family-friendly atmosphere.

Meanwhile don’t miss Aladdin, June 24. Composer Alan Menken earned an Academy Award and a Golden Globe Award for Best Original Score, as well as a nomination for the BAFTA Award for Best Film Music, for these catchy tunes. 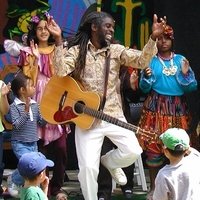 There is much for tots to uncover at Sausalito’s Bay Area Discovery Museum, and music is high up on the list.

The Summer Sunsets Concert Series kicks off on July 8, in conjunction with the museum’s exhibit, Curious George: Let’s Get Curious! Concerts are Fridays from 5 p.m. to 7 p.m., and feature local children’s musicians in programs tailored specifically for the very young and the very curious.

Acts include a participatory evening of drumming with Rhythm Child; the one-man-band Enzo Garcia playing instruments like the musical saw and the accordion; pirate music with the Bloody Scupper Plunder Club; and the spicy music and story telling of Caribbean musician, Asheba.

Bring your little ones and your picnic supper, and have a ball.

Independence Day weekend is a great time to enjoy the Marin County Fair, and with it, a performance by the United States Air Force Band of the Golden West on July 3. While the service ensembles — jazz, rock, concert band, choir, or orchestra — can provide an excellent career choice for young musicians, their training is far from basic. Typically, these positions are highly prestigious, and auditions draw some of the best Conservatory graduates in the country.

Says Staff Sergeant Jeremy Martin: “Although a college degree is not required to join our band, the competition for our positions becomes rather intense. Because of this, those who win auditions typically have at least a bachelor's degree in music, and many have masters or even higher degrees.” And applicants must be willing to accept a position in any of the nation’s regional bands or premiere bands based in Washington D.C.

The USAF Band of the Golden West plays more than 500 ceremonial and public engagements annually, including recording for TV and Radio broadcasts, at times collaborating with America’s leading band conductors. Their family-friendly concert at the Marin County Fair showcases a variety of music including classical, big band, Broadway, pop, and patriotic arrangements. Bring your kids to hear the nation’s best and brightest.