Lamplighters Spark the Next Generation 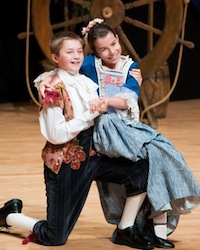 The Lamplighters are once again passing the Gilbert & Sullivan tradition to the younger generation at the San Francisco Conservatory of Music’s Summer Music West camp. And according to seventh-grader Adrienne Long, once bitten, it’s a tough bug to shake. "I wouldn’t have listened to this style of music before, but now that I’ve been introduced, I’m enjoying it. There’s a lot of humor there," she says. Under the direction of Ellen Kerrigan and her extensive team of vocal coaches, costumiers, set designers, rehearsal pianists, make-up artist — you get the picture — the kids learn vocal and acting technique and choreography through the lens of Gilbert & Sullivan’s late 19th-century comic operas. Lamplighters also conducts outreach in schools during the year, producing plays with casts comprised of their professional singers together with students from the participating school.

Adrienne is having fun learning from her peers and from vocal lessons by highly attentive and helpful coaches. And what young girl doesn’t like to play dress-up? “I love the costumes, they are my favorite part,” she exclaims. “The old ones were used in real main stage productions. They are very detailed, and look so real, it makes you feel like you are really that character in the play.” The cast of 37 will present scenes from The Gondoliers, Utopia Limited, The Pirates of Penzance, The Mikado, Patience, The Yeomen of the Guard and Ruddygore in their final show on July 2. Tickets are very limited and will sell out quickly. The box office opens at 1 p.m., the show starts at 2 p.m., suggested donation $10 adults, $5 youth. 50 Oak Street, San Francisco. 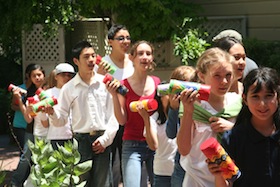 The cowbells and drums laid the beat, the brass joined in and rollicking Cuban carnival music brought the conga line of 27 campers into the hall for their final concert on June 24. What followed at the San Francisco Community Music Center was a world tour of folk tunes, classical, and jazz arrangements, and a final ensemble piece composed just for this camp and its diverse instrumentation by camp director Chus Alonso. Far from the usual cookie cutter experience, Alonso and his music teachers take a small group of young wind and string players at all ability levels and carefully tailor a week of musical learning, even if it means arranging music just for the group. “I like that the kids are taught different styles of music,” said Monica Scott, a Berkeley musician of distinction whose son attended for the second year in a row, this year as the only cellist in the program. "The camp's enthusiastic approach is inclusive, friendly and helps to build children's confidence. The atmosphere is not at all snobbish."

Just a week long, the kids worked intensely in small groups with instructors, as well as with the larger group to master several pieces, also learning Latin rhythms and songs through engaging games. Families enjoyed a post-concert potluck lunch and accolades were paid to retiring CMC director Stephen Shapiro — this was the final camp under his leadership.

Make music a part of your family’s Forth of July celebration! It’s hard to avoid—bands and orchestras are ubiquitous with fireworks, fairs and festivals on Independence Day, and this year there are events scheduled for both the 3rd and 4th. Check recent article on a few of the strong symphonic offerings. And don’t forget the Marin County Fair’s music stage, offering concerts by the US Air Force Band of the Golden West, the Preservation Hall Jazz Band and more, all free, included with the price of fair admission.

If you’ve never heard San Francisco’s Golden Gate Park Band over the course of their 129 years of Sunday performances at the Music Concourse Bandshell in the park, this weekend is your chance. Under the leadership of Michael L. Wirgler, this professional band plays a wide variety of music from opera and symphony transcriptions to marches and big band swing. Their special concert of patriotic music by American composers is July 4 at 1 p.m.