For Beck-Ruiz and His Choir, Elijah Is Child’s Play 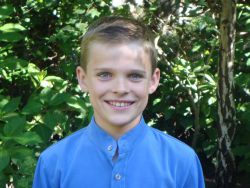 Fifth-grader Andrés Beck-Ruiz has already sung formally for half of his 10 years. Not many of his peers could boast the role of Harry in the Benjamin Britten opera Albert Herring under conductor Loren Maazel. Now Andrés is preparing to sing on the stage of Davies Symphony Hall as his group, the Piedmont East Bay Children’s Choir, joins Robert Geary, the California Chamber Symphony, and other grownups for a performance of Felix Mendelssohn’s Elijah. “It’s wonderful music. It is complex but I really like it. I’ve sung other classical pieces with the Piedmont choir too,” says the unassuming, soft-spoken boy. “I’ve also gotten into jazz more since I sang it with the choir on a tour to New Orleans. Bob Chilcott conducted us in a festival there.”

Beck-Ruiz discovered his passion and talent for singing after joining the choir in preschool, moving up through their graduated levels, eventually touring, and attending summer choir camp with the select group. “One of my favorite things about Piedmont is summer camp,” he says. “I get to sing a lot, my friends are there, and I like to swim in the lake.” His precocious musical talent just may be a credit to his family upbringing: Dad and Grandma play piano, his grandparents and aunt sing, and he himself plays both the piano and the clarinet. Not surprisingly, Beck-Ruiz wants to do something with music when he grows up. Come hear him sing a solo, together with Rod Gilfry, baritone (as Elijah); Clarissa Lyons, soprano; Wendy Hillhouse, mezzo-soprano; and Brian Thorsett, tenor. 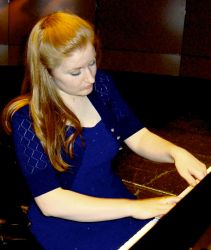 It’s a labor of love for Bryant McOmber, vice president and branch executive of Pacific Union International, the real estate brokerage company that has sponsored Concerts in the Presidio since 2005. At the same time it’s a fabulous gift to the community. McOmber had begun a similar series in 2001 while living in Half Moon Bay. Not himself a musician, but a music-lover, he works together with his daughter Erin McOmber who is pursuing a doctorate in vocal performance at the University of Utah. She programs the concerts, presenting emerging and some midcareer artists, along with younger musicians age 8 and up. She’s an occasional performer in the “condensed” concert versions of operas, which are wildly popular on the series.

Bryant McOmber says that Concerts in the Presidio “provides an outlet for young people to present classical music professionally, which is a style very underappreciated in their age group. When most of them are trying to channel Britney Spears, these talented kids are playing Beethoven,” an endeavor that has his full support. The Presidio Trust also lends support to the series, and crowds of between 200 and 300 people regularly attend.

The next scheduled program, titled “Fantaisies Françaises,” will be given Thursday and Friday, Aug. 25 and 26. Pianist Mariah Wilson performs works of Debussy, Ravel, Chopin, and others, with youth artists Rieko Tsuchida, Kenneth Renshaw, and Mary Robbins. 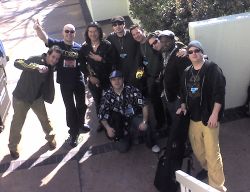 Berkeley’s biggest community jam session ever is about to roll out as the 4th Annual Downtown Berkeley Music Festival pumps out 62 concerts, Aug. 19–28. Festivities are sponsored by the Downtown Berkeley Association, the City of Berkeley, Berkeley Symphony Orchestra, and KPFA Radio, and are produced by the Freight & Salvage Coffeehouse. The 13 venues are sprinkled around downtown, from Freight & Salvage to the Jazz School and the Farmer’s Market, putting music in the city’s unique indoor and outdoor spaces. Classical, jazz, rock, calypso, folk, fiddle music, and funk make for an interesting mix of styles — and many shows are free. (Don’t miss the Berkeley Symphony’s Brass Quintet on Saturday, Aug. 27).

If your kids are aspiring jazz musicians, here is a chance to expose them to several talented youth groups on the bill; multiple jazz combos from Berkeley High School will perform, as will groups from the Jazz School. Take a look at the schedule — there’s something for everyone to enjoy at this family-friendly festival.