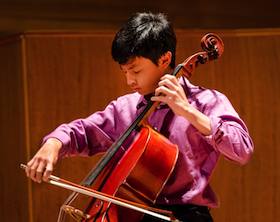 For the past three years, since age 12, Jeremy Tai has been in the audience of the Irving M. Klein International String Competition at San Francisco State University, "always dreaming that I could be one of the semifinalists — I am thrilled that this year my dream has come true."

The young cellist from Mountain View's St. Francis High School, is among the eight semifinalists — seven still teenagers — vying for cash prices, fame, and performance opportunities in the competition's final concerts, June 7 and 8.

"It is such a great honor to have the opportunity to learn and be inspired by top musicians, who share the same musical passion and aspiration from all over the world," says Tai, the only local semifinalist; the others are from Vermont, Boston, South Korea, Houston, Los Angeles, Illinois, and New York. The 29th annual competition drew 117 entries from 12 countries.

Tai's teacher is Jonathan Koh, a cellist who has played with the S.F. Symphony and other major orchestras; he became an S.F. Conservatory of Music faculty member at age 24, the youngest faculty hire in the school's 97-year history.

The competition will be open to the public for the semifinals, 10 a.m. to 4 p.m. on June 7, when each performer will play an unaccompanied work of Bach, movements from notable concertos, and a new commissioned composition by S.F. Symphony Assistant Concertmaster Mark Volkert. In the finals at 4 p.m. on June 8, contestants perform additional portions of their selected concerto and one major sonata movement.

Competition artistic director Mitchell Sardou Klein says this year's semifinalists "represent the new generation of classical music, where virtuosity and passion are more important than ever. We are seeing more children and teenagers pursue music careers and setting the bar even higher. They will take music to new, indescribable heights, and much of it starts here at the Klein Competition.”

This year’s grand prize, given in memory of Marvin T. Tepperman, includes cash and performances with the Peninsula and Santa Cruz symphonies, Gualala Arts Chamber Music Series, Music in the Vineyards, Noontime Concerts, and others. The grand prize is valued at $13,000.

Violinist Francesca de Pasquale, first-prize winner in 2010, is now a Starling Fellow and graduate student of Itzhak Perlman at the Juilliard School; she says of the competition:

It has been absolutely monumental in the shaping of my artistry and my career. It is completely unique in how it supports its winners, providing experiences in soloing with orchestras, giving solo recitals, performing chamber music, leading master classes and presenting educational outreach, all at an incredibly high level of musicianship and with complete generosity of spirit, which is what sets it apart in the classical music world from other competitions.

A panel discussion, "Orchestrating a Career in an Orchestra" at 4 p.m. on June 6 in Knuth Hall, is open to the public. Violist Cathy Basrak, cellist Robert deMaine and Volkert will discuss the life of orchestra musicians; Klein moderates. Tickets for the competition, available at the door, range from $5 to $20 (for a weekend pass).