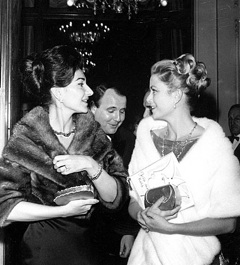 Her voice was ineffably moving, her appearances were the stuff of legend. She gave nearly 600 performances over an 18-year span. In one appearance, she received 27 curtain calls in an outpouring of adoration lasting more than 40 minutes.

These days, diva is used to describe everyone from teenaged pop stars to tantrum-prone supermodels. For many opera lovers, though, there is and always will be only one diva: Maria Callas, prima donna assoluta of the 20th century, known to her legions of fans simply as “La Divina.”

The great soprano, whose life was as full of color and drama as her singing, made only two concert appearances in San Francisco and never sang a complete role in the city’s War Memorial Opera House. But Bay Area fans will have a unique opportunity to honor her memory this month, when a special exhibition devoted to Callas arrives at San Francisco’s Italian Cultural Institute.


“Maria Callas: a Woman, a Voice, a Myth” will display a collection of Callas’ historic stage costumes, jewelry, books, letters, photographs, and memorabilia. Displayed at the Cannes Film Festival in 2009, and in Los Angeles earlier this year, the exhibition comes to San Francisco for a seven-week run. The opening night gala, which also marks the opening of the Italian Cultural Institute’s new headquarters at 814 Montgomery Street, is Sept. 23 from 6 to 10 p.m.; tickets are $125 to $500. Following the gala, the exhibition is open to the public Mondays through Fridays through Nov. 12.

The exhibition arrives under the direction of Bruno Tosi, the president of the Associazione Maria Callas and manager of the singer’s official Web site. Tosi, editor of the recent book The Young Maria Callas, has been collecting Callas memorabilia for five decades; he recently arrived in San Francisco from his home in Venice and, speaking through a translator, kindly agreed to answer questions about the exhibition.

Tosi was a 16-year-old student when he met Callas, who was singing the title role of Cherubini’s Medea at La Fenice. “It was my first time at the theater, and it changed my life,” he explained. “It was 1954, and I never thought Callas would be such a big star. The performance was her last Medea in Venice.”

Four years later, Tosi became a journalist. “I started interviewing her,” he said. “She was living in Verona then. I was of course very struck by her, and I was very shy because people said she was a very difficult woman. But instead she was very kind to me, I think because I was so shy. I interviewed her several times, and I saw her a month before she died, in Paris, in 1977.”

In between, Tosi, who also worked as a press agent — one of his clients was Renata Tebaldi, Callas’ great rival — had many opportunities to witness Callas’ artistry. “She was traveling the world, and so was I,” he recalls. “I saw her great performances at La Scala, at Covent Garden, in Paris and the United States, even in Japan, where she ended her career.” 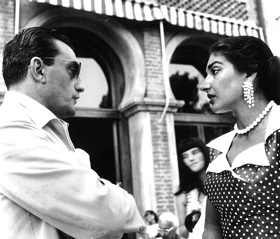 osi has amassed a significant collection of Callas-related items. Featured in the exhibition are costumes from throughout her career: a gold gown she wore in a 1956 La Scala production of Il barbiere di Siviglia, a silver and black costume from her 1958 La traviata in Lisbon, jewels she wore in Medea (including a crown from the 1969 film version, directed by Pier Paolo Pasolini), and an Yves Saint Laurent gown from her master class. Items from her personal wardrobe, as well as photos lent by the Hellenic Parliament foundation, are also included. Installation is by Terje Arnesen and Antonio Pio Saracino.

After San Francisco, the Callas exhibition will travel to New York, where it will open in January 2011, and to Sao Paulo, Brazil, with a date to be announced. According to Tosi, this will be its final tour; at the end of 2011, he plans to donate the collection to the City of Venice, where it will be archived.

The details of Callas’ life have been well-documented; more than 300 books have been written about the soprano born Maria Anna Sophie Cecilia Kalogeropoulos in New York on December 2, 1923. Her parents separated when she was still a teenager, and young Maria moved back to Greece with her mother, where she made her professional operatic debut in 1941, as Beatrice in Boccaccio. 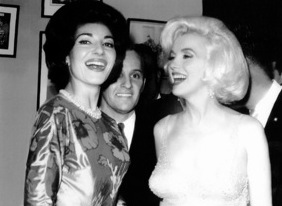 Callas’ Italian debut came in 1947, in a production of La gioconda at the Verona Arena. In the years that followed, she assumed the roles for which she became famous: Tosca, Violetta, Lucia, Elvira, Anna Bolena, and Norma, among others. Along the way, she sang an often bewildering array of additional roles: Aida, Isolde, Kundry, the Walkure Brunnhilde. She recorded a number of roles she never sang onstage, including Carmen and Puccini’s Manon Lescaut.

By 1953, she was a star — one of the most famous and influential the world has ever known. Although her voice was diminished in later years, Callas always embodied the high standards of the artist-idealist. “My mother wanted me to become a singer,” she told a biographer, “and I was quite happy to second her, but only on the condition that I be able one day to become a great singer. All or nothing.”

Yet her life often seemed as tragic as the heroines she portrayed. Callas was plagued by poor health, weight issues, overwork, fatigue, and an unhappy love life, including an ill-fated relationship with Greek shipping magnate Aristotle Onassis. Her death in Paris, of a heart attack, came at age 53.

“When she decided to stop singing, she gave up living as well,” says Tosi. “Singing was everything, and she let herself die. She lived in a desperate kind of isolation.”

Yet Callas endures in the public’s hearts and imaginations. For Tosi, the reasons are clear. “It’s her glorious career, but also her great life,” he says. “She’s a magnanimous personality. She’s been on more magazine covers than any film diva. Three hundred books have been written about Callas, and 30 about Marilyn Monroe. 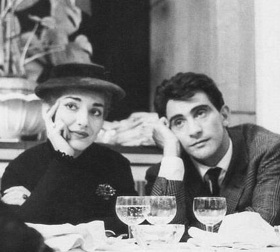 “But she was also very unhappy. Despite her glory, she lived with a great amount of pain. Her premature death, so tragic and mysterious, just grew her legendary status even more, although there was no need for that. She was already so great, and great legends don’t die.”

Callas made only two appearances in San Francisco — a source of enduring regret for the city’s legions of opera lovers. Her first, in 1958, was a concert at the Civic Auditorium, conducted by Nicola Rescigno. She returned in 1974, in a concert with Giuseppe di Stefano at the War Memorial Opera House.

For some, “Maria Callas: a Woman, a Voice, a Myth” will offer a measure of compensation. Will the exhibition summon the essence of Callas? Those attending will have to decide for themselves. Missing will be the voice, the presence, and the extraordinary passion of “La Divina.” For that, her recordings will have to suffice.