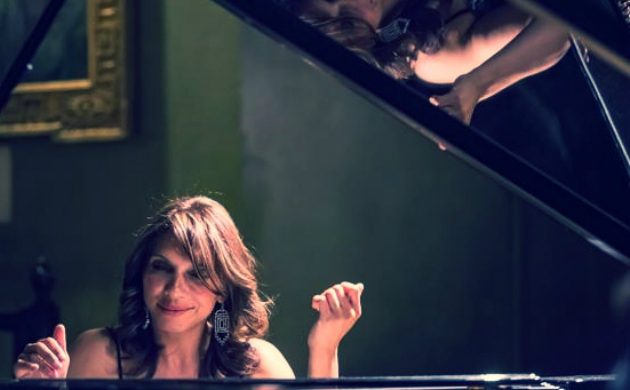 Awarded a 2016 Sphinx Medal of Excellence given each year to distinguished, emerging classical artists of color, American pianist Lara Downes says the $50,000 career grant “just fell from the sky.”

If it did, it was a sky painted with the deeply exploratory brushstrokes of a hardworking artist whose interest in classical music extends well beyond notes in a score or technique in fingers on piano keys. Lauded by the likes of NPR, Huffington Post, and others, Downes’ intriguing performance and recording projects, her Green Room radio show, and her Artist Sessions series of pop-up concerts demonstrate her good fortune is far more than luck.

But it might surprise most people listening to her nuanced, elegant, and decidedly facile playing — or audiences familiar with her casual, breezy conversational tone — that Downes has experienced a kind of “growth spurt” during the past several years.

“There are a lot of things about my [racial identity] and shaping my artistic choices that I’m only realizing now,” she says, as if waking from a dream. “This music — any music written against an ‘ism’ — was written by real people with real troubles, joys, suffering, fear.” -- Lara Downes

Downes’ father was Jamaican and grew up in Harlem. Her mother’s ethnic background is Eastern European Jewish. Downes has adopted the racial category she calls “Jewmaican,” a made-up term defining the cultural stew of attendance at temple and “fanatical listening” to John Coltrane and other American Jazz masters during her childhood. Her father died when she was 9, but was ill for a long time beforehand and Downes took to reading for escape. “I started at age 2, so they home-schooled me. I remember swallowing stories and books, sitting in a hallway in our house.” Because she was left to select her own reading, the books arrived “unsorted,” their themes sometimes stretching her ability to understand them. “There was disorder, but music was the one constant in our life. Piano — it was a lifeline, with everything else fitting itself in around that.”

Her first teachers at the San Francisco Conservatory were storytellers who had her playing “real pieces, not method-book exercises.” A Bartók work arrived with information about the folk song that inspired it; music written during or after World War II was made all the more dramatic by one teacher who was a Holocaust survivor and would tell her “conflicted, tragic, disruptive” stories about escaping from the camps.

Learning the personal histories of the mostly white, European male composers whose music formed the core of Downes’ training lent humanity and depth to her understanding of classical music. “One of my frustrations as a performer and in conversations about classical music’s survival is that there’s been anonymity around musicians. There’s a rigorous formality, a distance created by the stage that’s never made sense to me. If they have awareness of the people behind the music, the audience enjoys it more.” 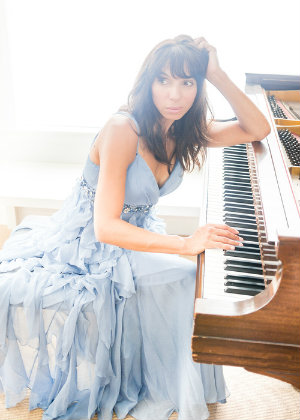 Perhaps her instinctive quest for backstories foreshadows the pivot Downes’ career took when she returned from having lived for over a decade in Europe and saw an exhibit at the Guggenheim. “It showed me the history of music in the 20th Century and how it connected to American culture. It was an epiphany, the idea of what music could mean to me. It set me on the path to creating personal context behind what I do musically.”

Downes says her work has become almost a form of self-analysis. Exploration of her racial identity is “complicated,” she says. “I’m ambiguous to look at, I grew up Jewish, and [when I lived] abroad I was a foreigner, exotic, just because I was American. Coming back to the States, I had to sort out what race means in America, what it means to be biracial in classical music.”

Projects that seemingly “leapt out of history” as her cultural awareness awakened include a recording she calls “a tribute to the holy ground of Billie Holiday” and “one of the bravest things I’ve done.” Admittedly, Downes is not a jazz pianist and she says that even approaching the Billie Holiday Songbook recording with respect and humility put her in a vulnerable position. “As an artist, where can you reach? How do you avoid assuming importance?” she asks.

Additionally, with independent musicians operating largely without the protective shield of record labels or agents, political correctness, intra-genre integrity, and economic expectations increase the pressure to play it safe. “We’re living in a busy world stage. At the same time, artists have the burden of supporting themselves. You might make a work about 9-11, but the world moves so fast, no one may hear it. The timing of promotion, impulse, and perception leave musicians leery. Art and current events, sometimes the flow doesn’t line up.”

“The whole concert is a fluid back and forth between conversation and music. We chat about each piece, but what happens is that we’re talking about the performance in personal ways. Program notes are great, but they don’t connect the dots between a piece and why we play it now and why we care about it.”

Downes says the “chemistry” between performers, between performers and audiences, and between all people and music explains why — during social upheaval and at times of great joy and heroism — classical music is a natural anecdote or a means of celebratory expression. “People pull out Beethoven when world events happen and they just need something beautiful.”

Or, they pull out poetry and write classically based music in response, like the Langston Hughes poem, “Let America Be America Again,“ that has inspired her new America Again recording. “This album took shape in my mind during the days immediately following the Charleston (South Carolina) shootings,” she says. “The music is a reflection of Langston’s words. The central point is about a dream that’s never come but that we have to keep working toward.”

Classical music, she says, has addressed class, race, economic inequality, and other social issues throughout its history and therefore, it remains relevant. “This music — any music written against an ‘ism’ — was written by real people with real troubles, joys, suffering, fear. Chopin wrote music to raise awareness in Paris about what was happening in Poland. Most people don’t know that. That kind of music withstands the test of time. The way to build its audience is to educate, but more, to communicate on a basic, human level.”