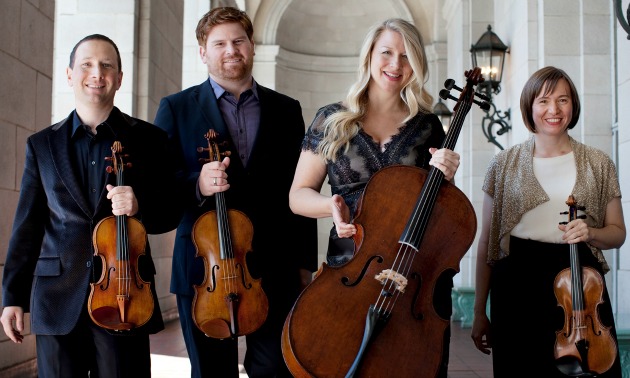 After 20 years the Cypress String Quartet is coming to music’s end.  The last notes will be played in a farewell concert in the Green Room of the War Memorial Building on June 26.

The denouement includes a series of three Bay Area concerts (Brahms Sextets), February 12 – 14, as well as month-long Beethoven celebration in May, in San Francisco where the group Is based.

The current quartet, a nonprofit organization, includes violinists Cecily Ward and Tom Stone; violist Ethan Filner; and cellist Jennifer Kloetzel, who spoke with us recently about the decision to stop.

The moment of truth came last summer. For months the group had considered ending their run. No one person led the way. No one was saying, ‘I’ll stay but you and you have to leave.’  All options were considered, including bringing in replacements — as problematic as that might be.

The quandary included subtle cracks in the foundation, including the normal wear and tear and frustration that occur in any group, particularly in one so often like a marriage. There were also little things: The director wanted to go to business school; the German manager wanted to retire from the music business altogether.

There was also a sense in the group of being satisfied with what they’d achieved. “We were sated,” as Kloetzel put it.

The quartet even brought in a specialist in organizational change to bring up all the pros and cons involved and explore what a dissolution would ‘look like’ and, by extension, how to recast all the passion that has been maintained for so long. Not to mention intense personal relationships in which each person becomes a teacher to the others.

“The one thing we didn’t want to do,” added Kloetzel, “was to end up on a list of ‘five worst quartet breakups’.”

The four musicians (which, according to Kloetzel, include two introverts and two extroverts, although she won’t identify them by name) met in the Mission District of San Francisco, in their offices in the Kanbar Center for the Performing Arts, and went to their recital room, which has just a book shelf and four rehearsal chairs.

“Finally,” said Kloetzel, “we just looked at each other and agreed, ‘ok, this is it, we’re done.’”

“Certainly not a joyful moment, but no weeping; simply the peace that comes with resolution.  At the same time, we felt enormous pride and saw this as a cause for celebration, and a reason to go out with a crescendo.”

The group assembled in 1996. Unlike many quartets all the members had finished school and decided to gamble on their talent to create a going concern. They rehearsed for six and seven hours a day, took any gig offered, focused on establishing an identity and envisioned a 20-year commitment. 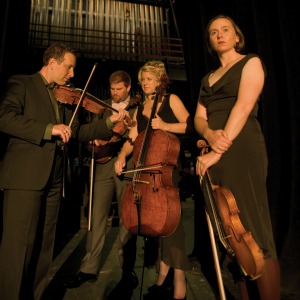 She added, “We were forged in the fires of Beethoven; the first piece we played was [Op.] 132 [Beethoven's String Quartet No. 15 in A minor] and not a week has gone by in all these years that we haven’t been thinking about or talking about or recording one of the 16 quartets.”

Kloetzel describes the group’s signature sound as shaped like a pyramid. It begins with the cello, which “lays down bass line that determines ultimately what all the harmonies are going to be, then a rich viola and on top of that, the ‘alto-y’ sound of the second violin and then perched on top everything the very beautiful and delicate sound of the first violin. Many quartets are the opposite and adapt to a reverse pyramid.”

As for a business strategy the quartet has focused on being ‘relevant’:  which has meant performing at businesses like Google, in schools, and concert halls, in nearly ever state and country.

Cypress’ accomplishments include 17 years of “Call & Response” programming — an audience development program created to demonstrate to largely younger audiences the relevance of older music and the inspiration that can come from it.

Other accomplishments include nearly 40 commissions and premieres; more than 15 commercially released albums; and 20 years of educational outreach activities, which have reached more than 150,000 students both in this country and abroad. Composers commissioned by the quartet include, among others, Philippe Hersant, George Tsontakis, Elena Ruehr, Benjamin Lees, and Dan Coleman.

Composers, “the Beethovens of today,” as the quartet thinks of them, have been chosen through a process of “pure listening”.  Violist Ethan Filner, who joined the group in 2001, would assemble music scraps and bits and then present them as though in a blind audition. The composer was unnamed. It was a very beneficial process because it led to choosing younger, less well known people, such as Kevin Puts and Jennifer Higdon.

“You asked about our identity,” Kloetzel added, “This is who we are: We’re fearless and take every everything that’s happened to us and turned it into opportunities.”