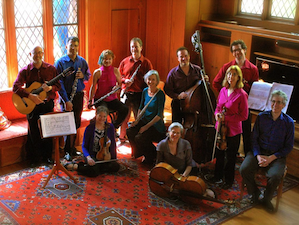 It would be an unusually daring season for a small organization, but not for the Left Coast Chamber Ensemble, which has been consistently adventurous and "out there" for 22 years. Artistic Director Anna Pressler explains what makes the organization tick:

Left Coast’s musicians are interested in the connections between new and old music, how diverse styles relate to each other, and how music connects to the other arts, so we explore the continuum of chamber music, across time and categories, in our programs.

Taking a cue from both the S.F. Silent Film Festival and the San Francisco Symphony, Left Coast is opening the season with "Films & Interludes," a program of silent films accompanied by live scores.

Beginning on Sept. 29 at the S.F. Conservatory of Music, and continuing on Oct. 2 at the 142 Throckmorton Theater in Mill Valley, the concerts will present Marcia Scott’s Bolinas, accompanied by a John Cage composition, and A Trip Down Market Street, scored by Gabriel Bolaños Chamorro, along with David Sanford’s Klatka Still with the video footage that inspired it.

"Circa 1945," on Feb. 2, 2015 (at the Conservatory) and Feb. 5 (Mill Valley), presents a program inspired by the 1940s — David Coll’s new remix of the Ellington/Strayhorn classic "Take the A-Train," along with Martinu’s neo-classical oboe quartet, Stravinsky's Elegy for Violin, and Messiaen’s Quartet for the End of Time. 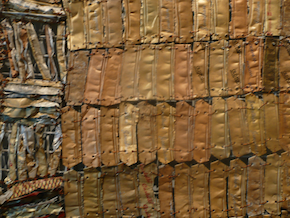 "Death with Interruptions," March 19 and 21 (in the ODC Theater), presents a new work based on Nobel Prize winner José Saramago’s novel Death with Interruptions, music composed by Left Coast founder Kurt Rohde and a libretto by UC Berkeley historian Thomas Laqueur. The new work is complemented by a performance of the slow movement of Franz Schubert’s Death and the Maiden.

The cast of the opera includes Nikki Einfeld, Daniel Cilli, and Christopher Bengochea, and the Volti chorus. Matilda Hofman will conduct, the director is Majel Connery. Death with Interruptions only will have a free performance in UC Berkeley's Hertz Hall, at 12:15 p.m. on March 16.

One black and one gold, the sculptures create art out of leftovers. Cornelia Parker’s Anti-Mass is formed from the charred remains of a church destroyed by arson. On the opposite wall is El Anatsui’s Hovor II, an enormous opulent wall hanging created from discarded bottle tops. The new works will also be performed at the museum, date and time to be announced later.

In addition to producing its own concerts, LCCE has commissioned and premiered more than 70 new pieces, and sponsors an annual composition contest that draws over 150 applicants each year. The performance of 2014 LCCE competition winner Felix Leuschner’s Krieg ohne Schlacht for Tenor and Cello is scheduled for the May 31-June 1 concerts.

Season tickets are available from the Left Coast website, single tickets at the door or from Brown Paper Tickets.