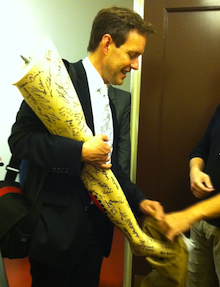 At the last performance of the triumphant run of Jake Heggie's Moby-Dick in the War Memorial on Friday night, something unprecedented happened in the history of opera.

As the composer made his final curtain call, to great ovation, the cast presented him with Captain Ahab's wooden leg, signed by the whole company. How do you find space for some 100 signatures on a pegleg? Probably by excluding John Hancock types.

Heggie appeared "giddy with joy," according to one report. The opera was very successful in Dallas and elsewhere, but this reception, in his hometown, apparently meant a great deal to him.

San Francisco Opera General Director David Gockley, who brought both Moby-Dick and John Adams' Nixon in China "home" to the city, after performances elsewhere, has been a champion of both composers for a long time:

How wonderful to be involved with these superb Bay Area opera composers. John and Jake are very different personalities and their styles derive from different traditions. Their work resonates strongly with the public, which is what it's all about.

Besides presenting their works, Gockley also commissioned or co-commissioned these operas: