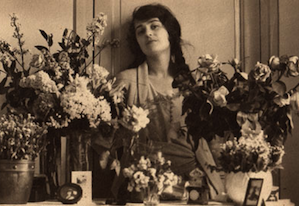 Caryl Emerson, author of The Life of Musorgsky, writes about the newly published Lina and Serge: The Love and Wars of Lina Prokofiev:

In the hagiographic hall of fame that is the Russian artist’s wife — Sophia Tolstoy, Anna Dostoyevsky, Nadezhda Mandelstam — all muses who stood watch while their men created things of genius and who then jealously guarded their legacies, Lina Prokofiev is odd woman out.

Her story almost cannot be believed, until Simon Morrison gained access to the documents (and the trust of the family) in order to tell it. Biography does not get more important than this.

A review of the work will be published here soon, meanwhile read excerpts from the book, and some of Stephen Walsh's report in The Guardian:

Born in Madrid in 1897 to a Spanish father and a Russian mother, both singers, Lina Codina was brought up from the age of 10 in New York, where she met the 27-year-old Prokofiev at a piano recital he gave in 1919. After a fitful courtship (Prokofiev was attractive, susceptible, and had high-profile admirers), they eventually married when Lina became pregnant with the first of their two sons in 1923. For the next 13 years she led the life of itinerant composer's moll, often travelling with him, sometimes even participating (as a singer) in his concerts, but always engaged in a battle with his music for a share of his attention.

The diaries suggest a spasmodic concern for her well-being. Quite apart from the essentially private act of composition, Sergey's favourite entertainments — chess, bridge — tended to exclude her, and at social events he would be lionised while she was to some extent neglected. As a singer, she inhabited an awkward penumbra in his vicinity. A nervy performer, she would often lose her voice and withdraw. His reports of her variable standard of performance express sympathy rather than the pain it caused her. Besides, she was, he thought, a fussy traveller, moody and sometimes quarrelsome.

The return to Russia was always, for him, a homecoming. For Lina — though she had visited as a child and spoke the language — it was an adventure whose successful outcome depended on his love and support. Alas, both were swiftly withdrawn. When she joined him there in August 1935 after a five-month separation, he immediately disappeared to the Caucasus, then to western Europe on another tour that lasted till early 1936, leaving her to fend for herself and their two small sons.

That year they moved into an apartment that Morrison describes as "impressive enough to be showcased to tourists from England" (a fair sample of his prose style), but that actually covered a mere 60 square metres, the size of a large farmhouse kitchen.