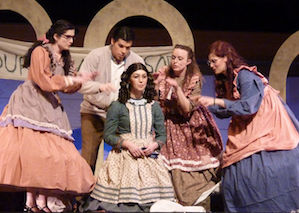 It wasn't just a drill, but a real emergency, giving voice students a taste of how wacky and impossible opera can be — and how to stand your ground.

Shortly after 3 p.m. Friday, just four hours before the S.F. Conservatory Opera Program's fully-staged premiere of Mark Adamo's Little Women, disaster struck. The entire front section of the Concert Hall's stage, which normally houses instruments, got stuck six feet up in the air, separating the rest of the stage from the auditorium. It could not be budged, not at 4, not at 5... not by the scheduled 7:30 p.m. performance.

Cancel or do "The Show Must Go On" bit? With the redoubtable and fearless Stage Director Heather Mathews in charge, canceling the show was not an option. Mathews has handled impossible challenges for numerous small-and-brave opera companies, so this was just another notch on her belt of staging heroism.

After much milling about in the lobby, confusion and uncertainty, some of the audience had a chance to see the performance, only slightly delayed. As one of the lucky ones, part of the reduced audience, I couldn't quite believe what Mathews hath wrought. 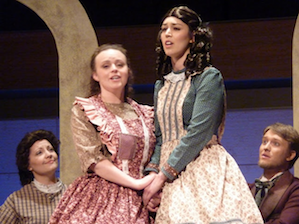 She gave up on the 400-seat auditorium, turned as much of the set around as possible, had chairs placed on every available spot of the stage (I was sitting inches away from pianist Darryl Cooper) and put others in the small choir loft overlooking the stage.

The strangest bit: The control booth in the back of the auditorium could not be moved, so lighting was handled from there, but with the elevated downstage in the way, so while they provided light, the technicians were truly "in the dark" — and did just fine.

The other Conservatory troupe of the double-cast opera performed under normal circumstances on Sunday. For the Friday Cast A, it was great going, led by Hannah Headland's untiring Jo March and Anneka Quellhorst's striking Meg March. Chelsea Hollow's Amy and Jill Morgan Brenner's Beth rounded out the quartet. Among the men, Daniel Bates' Laurie impressed with a strong tenor and assured acting. Curt Pajer conducted.

The 1998 Adamo work was of special interest, coming just a month ahead of the San Francisco Opera premiere of the composer's The Gospel of Mary Magdalene (see next column item). Little Women is one of the most frequently performed contemporary operas, a pleasant, enjoyable work, with too much text (the cast handled diction very well, except for the Four Voices mini-chorus), and very short melodic lines, almost like musical fragments.