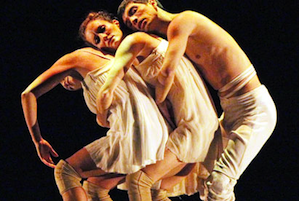 The Bay Area debut of the Russell Maliphant Company, an acclaimed contemporary English dance troupe, features a Nijinsky-inspired work, AfterLight. The program — Oct. 13 and 14 at the Yerba Buena Center for the Arts — uses images and photographs of the great Russian dancer, including Nijinsky's own drawings.

Canadian-born Maliphant was a member of Sadler’s Wells Royal Ballet before starting a solo and choreographic career, which has taken him to three continents. His most recent collaboration has been with famed theater and opera director Robert Lepage.

From Sarah Crompton's review of the London premiere in The Telegraph:

... an hour-long work, which takes the movement and the work of the great dancer as its theme. It opens with the solo, which is as transfixing as ever as Daniel Proietto swirls and turns in a circle of dappled light.

At first, dressed in red top and cream turban, he seems lost, his arms splayed, tentatively searching for beams of light. It is impossible not to think of Nijinsky’s old age when he succumbed to schizophrenia, locked for years in a world of confused silence. But as Proietto expands out of the shadows to the sound of Satie’s Gnossiennes, it is Nijinsky the performer who comes to mind.