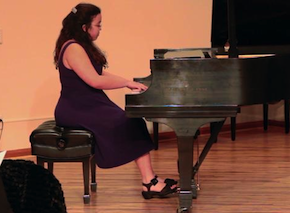 Among the stars at this year’s [email protected]’s Chamber Music summer camp and festival is a 14-year-old pianist from Los Angeles named Yoko Rosenbaum.

Gloria Chien, [email protected]’s Chamber Music Institute Director, said recently, “I still remember her Barber Souvenirs vividly from her first summer (2010). She was 11. Over the years, she played the Shostakovich Trio at 12 (it was fearless!); Smetana Trio at 13, and last year, her [Alfred] Schnittke piano six-hand was a big hit at the festival.

“She is a young artist beyond her age, and this summer we’re very excited to be assigning her, for the first time, the Brahms Piano Quintet, Arensky Piano Trio, and the first part of The Rite of Spring, piano four hands.”

We talked to Rosenbaum by phone; she took time out from her six-hour-a-day summer practice schedule (four hours a day during the school year) to talk about the camp and among other things, her approach to playing one her favorite pieces, Beethoven’s “Appassionata” Sonata, Op. 57.

“He knew his growing inability to hear was going to be a struggle, and as I play it I try to capture that feeling of helplessness. It’s one of the things I’ve been learning, how feeling translates automatically to the audience, and how to bring out that emotion in me; how to really feel what you’re playing and have a personal connection with the music.”

She added, “I’m a little bit daunted sometimes by a piece of music — not about how hard the piece is but how well I think I can play it.”

Such is the sound of accomplishment for a 14-year-old these days. And you may wonder, ‘but if she’s dedicated her life to music so early, there must be a catch; she must be out of balance somehow.’

“No, I feel like I have balance. I have a social life, and as long as I love doing this, I figure it’s worth it. Hopefully, I can go to conservatory, and I definitely plan on a career in music. I can imagine doing that….”

And which conservatory would she like to go to?

“She is a young artist beyond her age,” - Gloria Chien, director, [email protected] Chamber Music Institute

“Julliard, Curtis, The New England Conservatory, Rice. I would love to go to anywhere that would have me.”

Yoko started the piano, in her sister’s footsteps, at 4, violin at 5, and played in her first orchestra at 10. “It was being able to communicate without words that took my breath away, and then you begin to sense the audience and whether they’re enjoying it. Afterward, when people come up to you and say, ‘I really connected to your playing,’ then I feel I’ve done my job.”

And when she’s ‘in the zone’, what does she think about?

“I try to play the music as honestly as I can; I try to be true to the composer and at the same time add my own emotions. Always at the beginning you’re waiting for the adrenalin to kick in, your mind goes into overdrive. You’re no longer focused on technique, you’re just listening to how it sounds, and maybe, sometimes, I might try something I haven’t tried before. That’s what makes it interesting.”

In addition to her musicianship, Yoko also writes short stories for a middle school literary magazine she founded called Outlier. We asked to see some of her work; she sent along a story, an allegory, titled “When Death Comes Knocking.”

“The velvet twilight stalked the girl, nipping at her heels as she walked, head down and arms crossed over her chest, down the empty street, going to nowhere but away. The winter winds breathed down her neck, raising goose bumps on her already cold skin. The world was stark, colorless. An endless myriad of destruction, of ceaseless being without purpose or meaning.

We asked how she had come to write the story and she replied, “The writers were assigned a different prompt every week, and during the week in which I wrote that story, the theme was horror stories. I decided to take a fresher take, and focus on the physical embodiment of Death, rather than the act of dying.”

“It was being able to communicate without words that took my breath away, and then you begin to sense the audience and whether they’re enjoying it.” - Yoko Rosenbaum

How Yoko can travel from the dark moods of horror fiction to the emotional expanse of Beethoven is anyone’s guess. But it’s the music that drives her. And she adds, “When I think of my love of music it always comes back to Menlo and my first summer, just the environment and being able to interact with other musicians. Whenever I step on campus, I always feel something special is about to happen.”

At the three-week [email protected] camp, students, from nine to 29, are assigned to ensembles based on technical ability and experience. All require auditions. The daily schedule includes seminars on music history, research methodology, and speech preparation, along with rehearsals, workshops, and master classes with faculty members and visiting musicians. The program ends with three performances. Cost of the camp is $2,900, which does not include housing for those coming from afar.