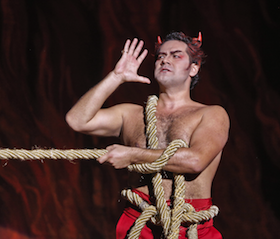 Ildar Abdrazakov, who sings the title role in Boito's Mefistofele at San Francisco Opera, doesn't look devilish, quite to the contrary: The Russian bass has movie-idol good looks, even if he has mastered opera's diabolic trio. Besides the Boito, he has appeared as the Prince of Darkness in Gounod's Faust and Berlioz' The Damnation of Faust. (Ignore SFO's naming convention, stick with Mefistofele.)

Is there a difference between the three? "Only the music," he says, "not dramatically or the character." That sounds surprising, but then so do many things about him. At 37, he is much too young for the seasoned, mature sound you expect from his kind of bass — he also sings Philip II in Don Carlo, and his ambition includes Boris Godunov and Massenet's Don Quichotte ... old men all.

His career went big very early: At age 22, he sang the title role of The Marriage of Figaro at his Mariinsky Theater debut. Doesn't that role require a different kind of voice than Mefistofele and the Chaliapin roles he covets? Abdrazakov shrugs, not one to take these things seriously: "I am a basso cantabile, I feel comfortable with all those roles." What does he consider his range? "I am flexible, certainly C to [low] C, I don't need to go lower." 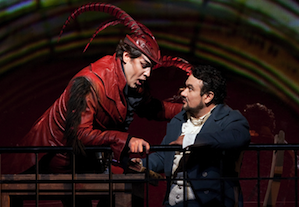 The look, the easygoing manner, the ready smile all belie Abdrazakov's ancestry. - He says he can trace his family tree to Genghis Khan (not a charmer); on his mother's side, he has Tatar blood; and his father's family descends from centuries of Bashkirs — a Turkic people, described in the court of the Caliph of Baghdad in 922 as a "belligerent nation ... worshipping 12 gods, chief among them Tengri, Lord of the Endless Blue Sky." His parents were artists, she a painter, he a director.

Abdrazakov was born in Ufa, then the capital of the Soviet Republic of Bashkortostan, now the largest Russian republic. He began acting in his father's stage and film productions at age 4, and very early in his singing career, he won prestigious vocal competitions: the Irina Arkhipova Moscow Grand Prix, the Glinka International Vocal Competition, the Rimsky-Korsakov International Competition, and the International Obrazova Competition. His 2000 win at the Maria Callas International Television Competition in Parma, Italy, led to his debut at La Scala the following year. 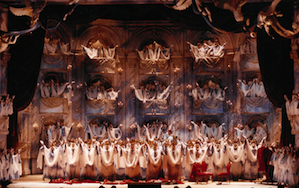 In addition to being a soloist in a Chicago Symphony Orchestra recording of Verdi’s Requiem that won two Grammy Awards, Abdrazakov stars in the title role of Verdi’s Attila on DVD, filmed in the Mariinsky Theater, and conducted by Valery Gergiev. Since 2007, Abdrazakov has been an ambassador for the Zegna & Music project, a philanthropic initiative founded in 1997 by clothing designer Ermenegildo Zegna to promote music and its values.

Although SFO advertises his Mefistofele as a role debut, it's a technicality. He sang the role two years ago, in a concert performance in Valencia, with the same conductor and he has sung Faust in San Francisco with Nicola Luisotti and Ramón Vargas. Of course, San Francisco's superb Robert Carsen production, a revival directed by Laurie Feldman, may give him much more to do than the stand-and-deliver concert version. Will he come up from the orchestra on a ladder the way his predecessor, Samuel Ramey, did? "Yes." If that's a spoiler, please ignore it.