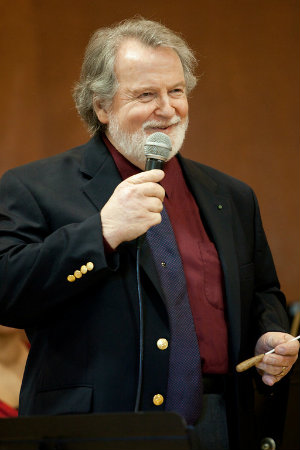 George Cleve, who died Thursday, August 27, at age 79, spent most of his career in the San Francisco Bay Area, where he was a prominent, beloved figure on the musical scene. Audrey Vardanega, one of the legions of Cleve's young protégés, remembered him over the weekend:

Something I'll never forget about George is how he was able to communicate pure emotion through music. Music was his way of communicating love to vast audiences, and being able to see that was truly extraordinary. I am so fortunate to have had him as a mentor in my life for almost nine years. I will miss him dearly, and I know that I'll never play another bar of Mozart without him in my mind.

Vardanega, a multi-talented musician and composer, came to George Cleve's attention when she was a 12-year-old student at Crowden School. Cleve championed "this Italian-Chinese pianist from Oakland, looking about 14, with an astounding natural feeling for Brahms, an 'old soul' playing." Not long after, she made her professional debut with Cleve's Midsummer Mozart Festival, playing - of course - Mozart, the Piano Concerto No. 14.

Over the years, Vardanega — now 20 and a junior at Columbia University — remained one of the young musicians coached and mentored by Cleve, who gave generously of his time. As part of the Midsummer Mozart organization, Cleve has created a new orchestra, the Mozart Youth Camerata, with teenage musicians. Cleve called this one of the most rewarding "intense ongoing relationships" of his career.

Vardanega last played for Cleve at his Berkeley home just days before his death:

I played "Ondine" from Ravel's Gaspard de la nuit. It was one of George's favorite pieces for piano, based on a poem by Aloysius Bertrand about a water spirit's failed attempts to seduce a mortal man.

"Ondine" portrays an ethereal, vibrating reality, created through layers of harmonic sonorities and overlapping voices. I like to think that George is among those sonorities now, and I know that for the rest of my life, I will always hear George in music. 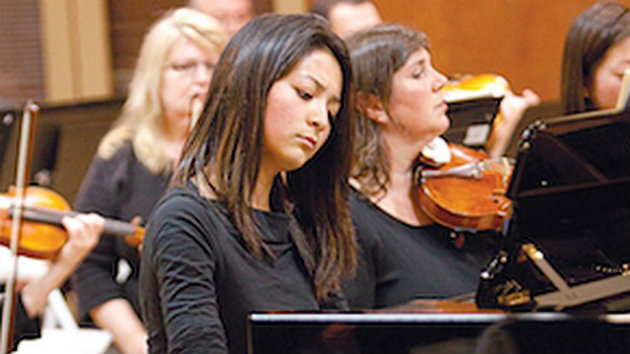 Cleve's impact on how audiences listen to Mozart ranges from young students to veteran musicologists, such as Stephen Smoliar:

Even when he conducted the most familiar selections Mozart — as he did this summer with the K. 551 (“Jupiter”) symphony in C major — he always brought a freshness to his interpretation, reminding us that there are will always be new facets in Mozart’s prodigious capacity for composition that remain to be discovered.

Cleve turned out to be a most talented young man and one who steps on the podium completely assured of his right to be there. His confidence is not misplaced.

San Francisco Opera General Director David Gockley addressed the company over the weekend, "sharing with great sadness the news of the passing of two great artists connected with [the S.F. Opera] and the Bay Area" on the same day, the other being the brilliant German stage director Nikolaus Lehnhoff, responsible for San Francisco's superb Wagner Ring cycles from 1976 through 1999, and such storied productions as Strauss' Die Frau ohne Schatten. Of Cleve, Gockley said:

He was known to many in the company through his work here (he conducted a number of Spring Opera Theater productions in the 1970s, and also performances of Carmen here in 2006), and his indefatigable work around the Bay Area, most notably with the Midsummer Mozart Festival which he founded over four decades ago, and the San Jose Symphony with which he had a long association.

He conducted many of the great international orchestras and was a deeply passionate and thoughtful musician. Despite battling illness, he was conducting at the Midsummer Mozart Festival just a few weeks ago, and a number of our orchestra members report how deeply moving that was.

We are much richer for the impact of these two great men in our lives. We mourn their passing and celebrate their significant contributions to this company, this community, and this art-form.

I have been a friend of George for a decade and working for MMF for the past five years. The past two years I have managed the festival under George's failing health. However, his unrelenting spirit and musical gifts gave us these past two seasons and they turned out to be amazing.

I have been working with George as well on his memoirs this past year. I loved him so very much even within his turbulent process I understood he was a perfectionist and I deeply respected that and gave him the space to make the performances impeccable.

Responses came in from far and wide, including one from Donald A. Hurd in Cincinnati:

I used to play violin for his Midsummer Mozart series, and he used to come, with Toni Navone, and listen to me play gypsy music when I was the strolling violinist at the Restaurant Russian Renaissance on Geary St. back in the 70s! And I'm, just now, getting around to reading the book chronicling the demise of the San Jose Symphony.

As for me, from decades of experience with Cleve's work, there is one memory that defines his legacy: in 2002, in the aftermath of San Jose Symphony's epic struggle for survival and then for resurrection, Cleve conducted the Clarinet Concerto in A Major when...

In one split second, it all disappeared.

A crushing debt of millions of dollars, an orchestra struggling for survival in the still-bleeding heart of shell-shocked Silly Valley, the ongoing consequences of administrative bungling, unreliable/underdeveloped community support, the sad story of musicians suddenly left without salary — it all fell away, vanished in the Center for the Performing Arts Saturday night.

What remained was the ineffable beauty of Mozart played with the kind of perfection I have rarely heard even in Vienna or Berlin.