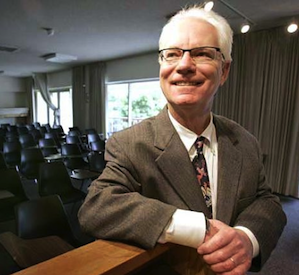 “I don’t think he likes fanfare with the spotlight on him,” mezzo Frederica von Stade testifies in an interview about the outgoing president of the San Francisco Conservatory of Music, who over the years has become a dear friend as well as a valued colleague. “And more than shining a spotlight on Colin,” she continues, “you sort of just want to put your arms around him. I think everybody feels that way about him.”

A half-hour earlier, the internationally celebrated singer had indeed welcomed Colin Murdoch back from extended medical leave with a big hug, outside his office on the second floor of the sleek structure in the city’s Civic Center, which the Conservatory has occupied since 2006. Far from threatening the lower back surgery which Murdoch had undergone in January, von Stade’s embrace brought a big smile to the face of the 67-year-old administrator. “He’s such a modest soul,” commented von Stade.

In a separate interview, the modest Murdoch was quick to credit von Stade with wielding her charm and celebrity during the long and arduous process of relocating the Conservatory from the 1920s former orphanage it had occupied, on Ortega Street in the Sunset District, to its current campus at 50 Oak Street. “She was with me so many times, with the mayor and the press,” says Murdoch. “It’s a very remarkable deep feeling of sympatico.”

Many see that sort of feeling as radiating from Murdoch to the Conservatory’s faculty, students, and other administrators, helping to sustain an institution unique among other music schools. “It’s something about how the talent develops more naturally,” says cellist Bonnie Hampton, who’s currently on the faculty at Juilliard but returns at the beginning of each semester to teach at the Conservatory, with which she’s shared five decades of history.

Murdoch found the Conservatory job by chance while attending a meeting of the National Association of Schools of Music, in Boston. He says he wasn’t really looking for a job, but “I’d been dean at [the] Lawrence [University Conservatory of Music, in Wisconsin] for 10 years, and I was ready for a lot of different kinds of challenges.” “This building was Colin’s footprint, and not just the building, but the way the Conservatory runs. It’s a musical building, and a cordial building, and it has what I think music is all about, which is a deep respect for life and for talent.” - Frederica von Stade

There were plenty waiting in San Francisco, when he arrived as a new dean of the Conservatory in 1988. “He was inheriting many things,” Hampton points out, “including a pretty lively, individualistic faculty. He was always an open door, and I remember noting how well he listened. You weren’t quite sure how he was thinking, except that he was open to it. But it wasn’t just idle listening, he was processing all these things, [as evidenced by] the directions things took.”

On first sight, “I saw a building in disrepair, and a program that didn’t fit into the building in any way,” Murdoch recalls. “The only room in the place that had acoustics was Hellman Hall. It was absent institutional structures, and was in serious trouble with accreditation. It needed attention in just about every area. I’m not saying this to be critical of Milton [Salkind, his predecessor], that’s just the way it was. But there was a tremendous commitment to the higher calling of music, music was alive and well here, and the faculty was first-rate. The board of trustees was so deeply committed and devoted to Milton. But they knew there was something missing.”

“Colin had a big mission to move,” confirms Timothy Foo, a private investor and the current chair of the board of trustees. “He was at every single committee meeting, all the time. He doesn’t say that much, but when he does, there’s a point to it. And he could articulate the mission very well to the donors, and he certainly knew enough people in the community to secure their commitment.”

Foo had been a fellow student of Murdoch’s at Brown University in the 1960s, and remembers him performing handsomely in the Bach Double Violin Concerto, in the same concert which featured Foo in an a cappella group. “I’ve talked to a couple of people that knew [Murdoch] in his earlier days, when he was a performing violinist and a teacher, and he was really good,” adds Hampton. At the Conservatory, “Colin was tuned into that very sensitive side of musical communication. He was a very private guy and didn’t express these things much, but I remember once he was talking about a particular performance that [pianist] Menahem Pressler had given. And he said, ‘That was the most sublime expression of love I can think of.’ His relationship with music was simply getting into the essence of it, and what the communication of the music was.”

Opening Doors to the World

In the matter of building a world-class faculty, Murdoch “is a brilliant musician, and he’d be able to know if the violin teaching is good,” says von Stade. “And the vocal program is getting better every year. One of the heads of the department is Cathy Cook, who is an extraordinary woman, and Colin is the person who chooses someone like Cathy. He’s violently interested in pedagogy and training.” As dean, Murdoch had stood against moves to eliminate the graduate chamber music program which had been initiated by Hampton.

Murdoch, with von Stade sometimes riding shotgun, faced considerable resistance in the effort to move the campus, but “In my heart of hearts, I knew that if the institution wanted to become a significant player on the world stage — and my sense was that it did want that — it would never happen in that [Ortega Street] building, in that location. In the end, my basic pitch was: It’s not about a building, it’s about the Conservatory’s future and the future of music. If schools like this don’t exist and thrive, then we won’t have the San Francisco Symphony at some point in the future.”

With characteristic quiet determination during three years of seeking a new location, Murdoch, who resides in Novato, had “spent three or four nights a week at the Inn at the Opera. I was there because I was walking the streets at every hour of the day and night, getting to know the neighborhood. My primary interest was are these streets safe for our students? Is there a life here? And I became very comfortable with it.”

“This building,” says von Stade, “was Colin’s footprint, and not just the building, but the way the Conservatory runs. It’s a musical building, and a cordial building, and it has what I think music is all about, which is a deep respect for life and for talent.”

“Footprint” may be okay, but Murdoch is “uncomfortable with the word ‘legacy,’ because I feel that we’re all passing through. I was thinking just this morning, it’s 25 years, and I think I’ve done what I was sent here to do. And maybe five or six years ago, I said to Larry Newhouse, the piano technician who’s been with us for many years, ‘I don’t know when I’m going to be retiring, but at that time, I’d like to go back to the piano.’ After I announced my plans — I’m not retiring, I’m retiring from this position — Larry came in and said, ‘Colin, I may have found your piano; it’s a 1927 Steinway M in absolute mint condition.’ Now it sits in our living room, and I can’t wait to go home and get to know that thing.”

“In the end, my basic pitch was: It’s not about a building, it’s about the Conservatory’s future and the future of music. If schools like this don’t exist and thrive, then we won’t have the San Francisco Symphony at some point in the future.” - Colin Murdoch, retiring president, SFCM

Foo credits Murdoch with "setting the Conservatory on an upward trajectory, manifest in the quality of student and faculty we’re attracting, and he enabled us to really attract a great pool of candidates for the next president ... David Stull, another visionary." An endowment in the names of the outgoing president and his wife, the Colin and Sam Murdoch Scholarship Fund in Chamber Music, "is already well into six figures, contributed by [Murdoch’s] friends and colleagues," Foo reports.

On this year’s Commencement Day, Murdoch rose early, got to work early, and finally reached "the moment I’ve just treasured year after year after year, " presenting diplomas to the latest legion of young musicians. "There was a moment when I realized this was the last time," he recalls later, from his Novato homestead. "I had to grab myself: No, Colin, this isn’t about you, it’s about them, and I was able to get back into control. Then I was about to walk to the lectern, and Tim [Foo] stands up and cuts in front of me and says, ‘Colin, can I have a few minutes?’, and he walks to the lectern. He began to speak about me, and I couldn’t listen to it. Then he said, ‘Would you join me at the lectern?’"

Murdoch pauses to stifle a sob before continuing. "Tim told me the board of trustees had voted to award me an honorary doctorate. People stood up and applauded for what seemed like an eternity! The brass started to play, sooner than they should have. Then I turned to congratulate the graduates and their families and friends, and after I finished, I said, ‘Let the trumpets begin!’"