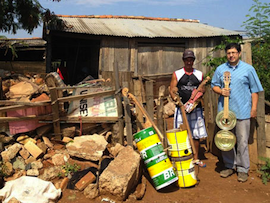 When this documentary first started going around, about people living on a landfill in Paraguay, who create music instruments from trash and their children play them, I suspected a hoax.

It appears true, however, with many reports confirming this phenomenon, which outdoes the El Sistema miracle in Venezuela.

The young musicians are from Cateura, a vast landfill outside Paraguay’s capital where some 25,000 families live alongside reeking garbage in abject poverty.

The youngsters of the Orchestra of Instruments Recycled from Cateura performed in Brazil, Panama and Colombia this year, and hope to play at an exhibit opening next year in their honor at the Musical Instrument Museum in Phoenix, Arizona.