Composer Laura Karpman’s defining story began in a restaurant in Switzerland and came to light when she was approached by the Cabrillo Festival to help create Hidden World of Girls: Stories for Orchestra. 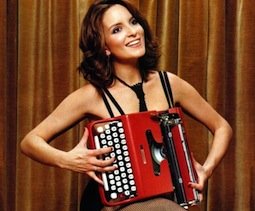 “[My mother’s] abandon for who she was as a person has really shaped me in every conceivable way as an artist,” Karpman relates. She shares the story of traveling to Europe as a child on a family vacation. Her mother had a vivaciousness that could not be contained, much to her young daughter’s chagrin. Her mother danced the night away on a restaurant table; the same table that Karpman hid beneath. “Seeing her like that has been a point for me through my entire life — at first responding to that in I’m going to study, I’m going to be a professor and then ultimately finding my way to my own creative voice and what I really wanted to do with my life as a composer.”

That moment beneath the table that had so terrified Karpman as a child later brought her to life when, as a young adult on break from music conservatory, she found herself back in a European restaurant. But this time, instead of ducking for cover, she found a bit of her mother inside herself and used this strength to open her mouth and sing for a room full of jazz-loving Parisians.

“It was a series of moments that was really shaping for me,” Karpman notes of her own hidden story. This story came to the surface when, in 2009, Karpman was introduced to the project being undertaken by the Cabrillo Festival and NPR’s Kitchen Sisters. Karpman agreed to become the lead composer and creative director of the project, giving life to Hidden World of Girls: Stories for Orchestra.

From Radio to Music and Theater

The Kitchen Sisters have inspired audiences through real-life stories from around the world on their radio series, called The Hidden World of Girls. “The big challenge of [the process] was how to make this kind of format — which was absolutely structured with radio in mind — come alive in a concert. That to me was the big challenge, and what was really enticing about the project,” Karpman explains of first approaching the work. “We had to come up with a way — what are we going to do? How are we going to create a theatrical evening that’s really about symphonic music but also is about these stories?”

“My mother’s abandon for who she was as a person has really shaped me in every conceivable way as an artist.”

In this incarnation, the new orchestral works of several composers underscore the radio stories with a live orchestra, and then the composers respond to the stories. “It’s similar to a silent movie but the opposite, because the narrative is spoken and not written. … [The piece] goes back and forth between these orchestral stories and the radio stories. And all of this is accompanied by incredible visuals by Obscura Digital, who are the same people who brought us the YouTube Symphonies and lots and lots of other works.” 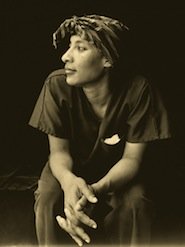 Yet, to tell the radio stories and respond with a symphonic work, Karpman needed the right composers to join her in the project. Karpman and the Kitchen Sisters, through an unusual process, selected the three younger composers taking part in the project. Clarice Assad, Alexandra du Bois, and Nora Kroll-Rosenbaum each submitted her own hidden story to truly represent who she was and what she could bring to the work. “I think it makes it more personal. And so you can really find out how sensitive somebody is. … You just get more information that way. I was the one who suggested and really advocated for this. I think so often with competition the process is so limited, and frankly, for women it often is. … I wanted to know more than just listening to a score or looking at somebody’s resume. You wind up bringing a personality to the process — a composer becomes a whole person.”

After gaining insight into each of the three composers, Karpman was able to guide her through the plethora of stories collected by the Kitchen Sisters, to one with true meaning for her. “Perfect example: Nora Kroll-Rosenbaum wrote about her twin sister, and then ‘Pat Cadigan’ is a whole story about her best friend and how they would go on a sort of sci-fi adventure together. It was obvious that that was the perfect match.”

Karpman also found common themes between her story and that of Deborah Luster. “[Her] work, in a much darker way, but still in the same kind of way, springs from her relationship with her mother. I think that’s one of the reasons I was drawn to her story.”

“I wanted to know more than just listening to a score or looking at somebody’s resume.”

Luster’s story is one of tragedy that gave her courage to understand violence. Luster is quoted on the Kitchen Sisters’ website as saying, “Perhaps it was their spirits that moved me to pick up a camera, for in our family the camera was ‘manned’ by women. It was my turn. Or perhaps I picked up the camera out of desperation. I did need a tool. I was buried under the loss of my family members.”

The voices and stories found in Hidden World of Girls: Stories for Orchestra has created bonds between individuals who would otherwise never have known each other. “I wanted to keep the core mission of what the Kitchen Sisters do intact,” Karpman says, “but I also know what it is to bring recorded material into the concert hall. … How do you take recorded material and turn it into a live adventure?”

The adventure will finally come to life on July 28 and 29 when the creative team brings its hard work to the stage. “I hope people will be moved,” she concludes.